Nigerian police vow to resist any planned protest in Lagos 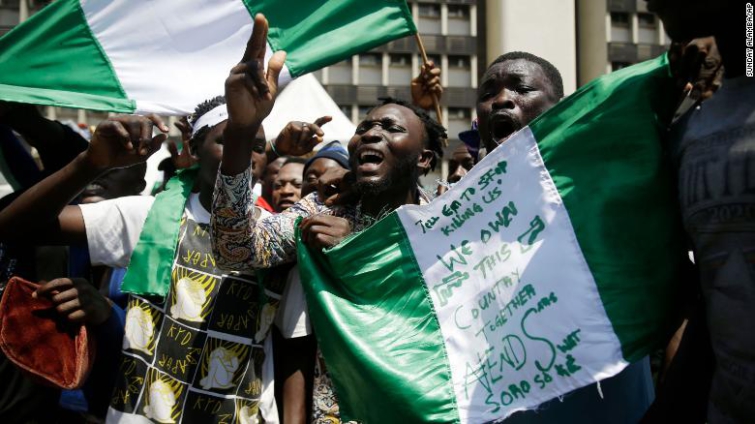 People hold banners as they demonstrate on the street to protest against police brutality in Lagos, Nigeria, Tuesday Oct. 20, 2020. After 13 days of protests against police brutality, authorities have imposed a 24-hour curfew in Lagos Nigeria???s largest city as moves are made to stop growing violence. ( AP Photo/Sunday Alamba)

The police have advised parents and guardians to discourage their children and wards from embarking on any protests in Lagos.

Following the violence that followed the EndSARS protest in Nigeria, Lagos State Police Command has vowed to resist any form of protest or procession under any guise in the state.

The police in a statement signed by Olumuyiwa Adejobi, the Force Public Relations Officer in Lagos on Thursday, November 5, 2020, said Lagos still nurtures the wounds of the havoc that trailed the Endsars protests in the state.

Describing the ‘Endsars violence’ as dangerous and counterproductive, the police said it is aware that a group of people have concluded plans to orchestrate another set of violence in the state to further the violence unleashed on the state on Wednesday, October 21, 2020.

The police, therefore, warned any individuals, group of students or any groups that might want to stage protests in any form to desist from such a plan.

The command also advised parents and guardians to discourage their children and wards from embarking on any protests in the state.

The statement reads; “The Lagos State Police Command has vowed to resist any form of planned protest, procession or gathering under any guise or nomenclature in Lagos State as the government and people of Lagos still nurture the wounds of the recent Endsars violence that wrecked havoc across the state.

“The command wishes to inform the general public that based on intelligence gathering from relevant intelligence agencies, some unpatriotic elements or group of people have concluded plans to orchestrate another set of violence in the state in furtherance to the recent Endsars violence, which has been analysed as dangerous and counterproductive.

“Premised on this, the command, therefore, wishes to warn any individuals, group of students or any groups who might want to stage any form of protest, either “peaceful” or violent, or gathering whatsoever, to desist as the police and other security agencies will collectively and tactically resist any security threats or threats to public peace which might be triggered by protest or protesters in Lagos State.

“The Police command, emphatically, warns parents and guardians to discourage their children or wards from embarking on any protest in the state as the possibility of hijacking it by armed hoodlums to cause grieve and pains like the recent past is evident.

“We encourage the general public to ignore any call for protest and go about their lawful businesses as all hands are on deck to maintain law and order and public safety across the length and breadth of the state”.

You’ll recall that following the Lekki shooting on Tuesday, October 20, 2020, hoodlums took to the streets of Lagos to loot, vandalise and set many public and private properties on fire.

Media houses owned by the national leader of the ruling All Progressives Congress (APC), Asiwaju Bola Ahmed Tinubu, many police stations and vehicles belonging to the Lagos State Government were some of the properties that were burnt to ashes by hoodlums.