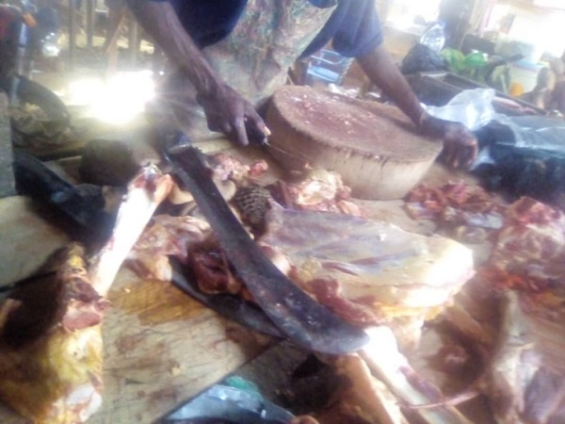 There has not been meat sold in the Bolgatanga market for the past two weeks as butchers in the township have refused to relocate to a new abattoir.

The Bolgatanga Municipal Assembly in the Upper East Region in a bid to solve the problem called for applications from butchers to operate the newly constructed abattoir at Yorogo, a community in the Municipality.

The call came after butchers at the old abattoir declined to relocate to the new abattoir after several negotiations with leadership and members of the Bolgatanga Butchers’ Association.

The abattoir was constructed in July 2017 with funding support from the World Bank and was commissioned for use in 2018 with modern slaughtering and animal processing facilities, lavatories, and a pavilion.

Following the decline by the butchers to relocate, the Assembly locked up the old abattoir for the past one week and issued a public announcement to recruit butchers to operate in the new facility.

“Interested persons are therefore to submit applications for consideration as butchers. All applications must be addressed to the Municipal Chief Executive and submitted at the registry of the Assembly on or before Friday, 28th January 2022,” management of the Assembly said.

In an earlier interview, Tindaazok Koldo, the Chief Butcher at the old abattoir, said prior to the construction of the new abattoir, the leadership of the Butchers Association was not consulted.

According to him, there had not been any discussion between the butchers and management of the Assembly, and after the completion, he and his colleagues declined to relocate.

Mr Koldo said apart from the lack of consultation, the new abattoir could not accommodate the about 400 butchers who operated in the old abattoir, adding that there was no livestock market near the new abattoir at Yorogo to keep them in business.

Contrary to the issues raised by the Chief Butcher, the Municipal Chief Executive, Mr Rex Asanga, told the GNA that the Assembly had held a series of meetings with the butchers and even signed a Memorandum of Understanding to address their concerns.

He said the butchers would have to relocate to the new facility before the livestock market could be relocated, adding that the butchers only consumed about 40 per cent of the livestock, while the remaining 60 per cent was transported to Southern Ghana and patronised by members of the public.

Mr Asanga noted that the livestock market could not be moved immediately, “That will not be fair to the cattle traders. They also have their issues,” he added.