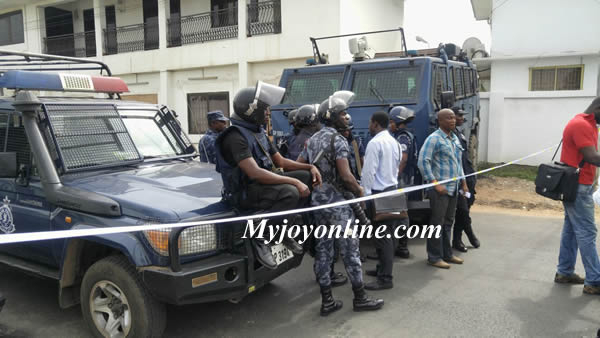 Reports reaching Joy News indicate that persons believed to be military officers stormed the NPP's Headquarters at 1am Monday and ransacked all offices in the building.

Joy News' Beatrice Adu who was at the premises and reported that there is heavy police presence at the headquarters.

She said fully armed police officers have cordoned off the premises and are preventing journalists and other people from accessing the area.

Some party officials – according to information Beatrice gathered – claim some six military men stormed the offices at dawn on Monday to search the offices and locked up the security officers and searched some offices.

The NPP's parliamentary candidate of the Awutu Senya West constituency, Nehyi George Andah tells Joy News, 11 people have so far been arrested. These 11 are currently at the police headquarters in Accra.

Some of the 11 suspects being transported to the police headquaters

"From what we are gathering from the security men, two vehicles supposedly military vehicles with about six people in military uniform came to the party head office and said that they had heard that there was some confusion taking place but the security guys told them they was no confusion.

"They entered the place locked up the security men and broke into various offices at the headquarters carrying sacks. After they finished their operation, they came out and asked one of the security men to remove something from the sack they were carrying and put it back – apparently to get his finger prints….and they took him away", Mr Andah said.

He added that the police forensic team is about to enter the various office to assess the situation, adding "the police are on top of the situation".

He indicated that one of the suppsoed military men who broke into the offices has been identified by one of the security men as a member of the NPP.

Earlier, in an interview on Joy FM’s Super Morning show, the Second Vice-Chairman of the party Sammy Crabbe told host Kojo Yankson that he has no idea what was happening or why the party headquarters was raided.

“I think your reporter has more information than I have”, he said.

He said although he has been to the party headquarters, the police restricted his access. “It is a crime scene and so I just got back into my car and left”, he said.

The police, he said, have however assured that he will be informed about the situation after investigations are completed.