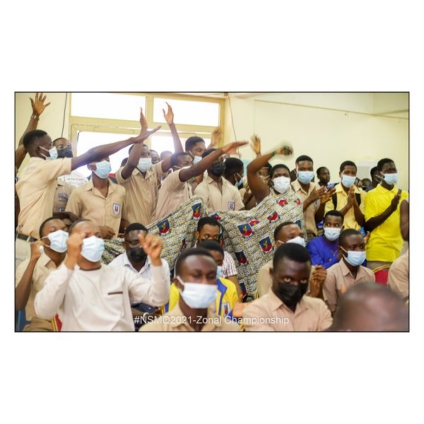 The eagle from Keta SHTS is flying high. High above the entire Volta and Oti Regions, demonstrating their prowess in science and maths.

Keta SHTS makes history as they clinch the maiden edition of the Volta-Oti Zonal Championship of the 2021 National Science & Maths Quiz.

They garnered 42 points to beat their closest contender, Sogakope SHS and Sonrise SHS in the Grand Finale held on Saturday, May 29.

It was Sogakope SHS that took an early lead in the first round of the competition to give Keta SHTS a 6-points gap and 12-points from Sonrise SHS.

But they lost their composure in the subsequent rounds to give away their lead to the Keta-based institution.

The contestants of Keta SHTS came back stronger in the Speed Race Round; picked almost all the questions on the first attempt. They scored 26 points whilst SOGASCO moved second position with 19 points; a point short of the scores in the Round 1.

The Dzolalians extended their lead in the Round of True or False statements with 39 points. SOGASCO followed with 23 points and SOHISCO trailed with 22 points.

The one-time NSMQ semifinalists maintained their fine form in the remaining rounds to end the contest with an emphatic victory to make history as champions of the first-ever Volta-Oti Zonal Championship.

Keta SHTS came into the Zonal Championship as a seeded school. At the semi-finals, Kadjebi Asato SHS, Kpando SHS and Abor SHS were no match for Dzolali contestants. They had a whooping 73 points to silence their contenders with Kpando placing second with a paltry 17 points.

Contestants of Keta SHTS are hopeful of replicating their outstanding performance at the national championship in October 2021.