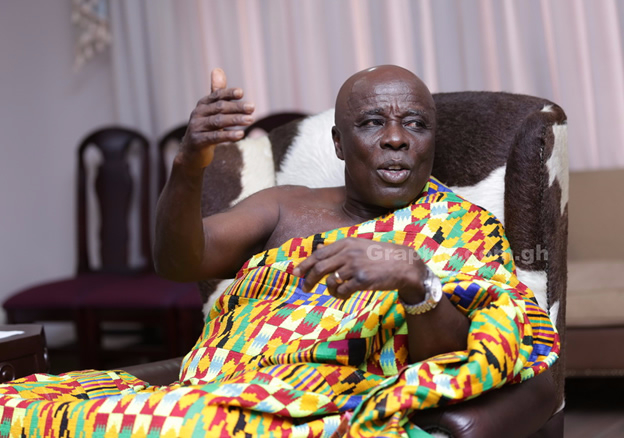 The Okyenhene, Osagyefo Amoatia Ofori-Panin, has launched the 20th Anniversary of his ascension to the Ofori-Panin Stool at a ceremony at the forecourt of the Palace at Kyebi in the Eastern Region.

On October 4, 1999, the Okyenhene was enstooled as the 35th Chief of Akyem Abuakwa to succeed his late brother, Osagyefo Kuntunkunuku.

Speaking at the launch as the Guest of Honour, Mr Kofi Dzamesi, Minister of Chieftaincy and Religious Affairs, described the Okyenhene as one of the respectable chiefs who had brought honour to the chieftaincy institution.

He said Osagyefo Amoatia Ofori-Panin, in his 20 years of rule, had brought innovations and development that had impacted positively on the people of the area with particular mention of his role in fighting illegal mining and environmental degradation.

The Minister said it was not for nothing that the Okyenhene was elected as the President of the Eastern Regional House of Chiefs and commended him for his role in resolving chieftaincy disputes in the Region.

Activities lined-up for the celebration, from October-December, include the commissioning of a Children’s Library at Kyebi, the Okyenhene Invitational Golf Tournament, sod-cutting of Amoaia Ofori-Panin Basic School projects, football gala, musical concert, royal ball dinner and grand durbar on December 14.

Earlier, the Okyenhene had toured communities and villages within the Traditional Area with a medical caravan where the people were provided with free medical screening for the eye, diabetes, cancer, and HIV among other ailments.

DISCLAIMER: The Views, Comments, Opinions, Contributions and Statements made by Readers and Contributors on this platform do not necessarily represent the views or policy of Multimedia Group Limited.
Tags:
20th Anniversary
Okyenhene
Osagyefo Amoatia Ofori Panin