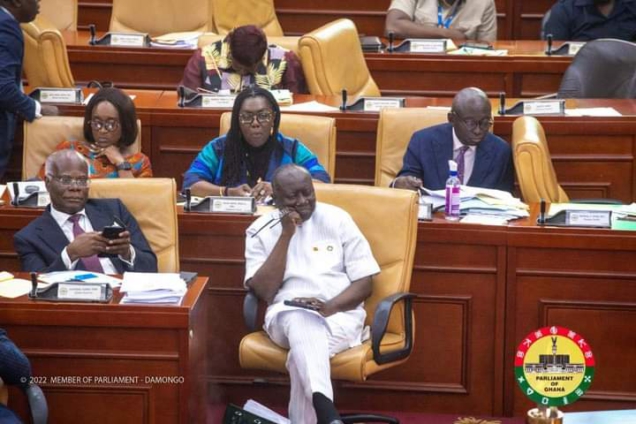 Finance Minister Ken Ofori-Atta walked out of the Parliamentary chamber unscathed on Thursday.

MPs concluded Article 82 (3) debates on his removal from office but the vote failed to amass the needed 183 affirmatives, representing two-thirds of all Parliamentarians.

The voting itself was devoid of the dramatic tempers and brawls that have become the trademark of the 7th Parliament; not because cool heads necessarily won but because the majority group—New Patriotic Party (NPP) MPs and one right-leaning independent walked out of the chamber before the votes were taken.

The boycott saw NDC MPs two men short of a quorum to take decisions in the House. Voting, nonetheless, went ahead as all 136 Minority lawmakers voted to coerce President Nana Addo Dankwa Akufo-Addo to remove the Finance Minister.

“In accordance with article 82 (1) which reads; Parliament may by a resolution supported by not less than two-thirds of all the MPs pass a vote of censure on the Minister for State.”

The entire process itself was fraught with greyness.

The Speaker initially referred the motion to an ad-hoc committee of MPs—a move critics said violated the process set out in the Constitution which only says a debate be held within 14 days of the motion hitting the floor.

But the biggest upset in the past few weeks leading to the failed vote on Thursday is the duplicity of majority legislators.

A group of 80 NPP MPs—later renamed “The Brave 80” broke ranks, set precedent and demanded the President (from their own party) sacks the Finance Minister over the country’s economic woes.

The 80 backbenchers would later be summoned by the Jubilee House after which meeting they kowtowed to Executive pressure to allow Ken Ofori-Atta remain in office throughout IMF Programme negotiations.

Later, the so-called Brave 80, with an increased strength to 98, reneged on their word to the President and threatened to boycott the 2023 budget presentations if Ofori-Atta is not relieved of his duties.

“We are back to our original position,” leader of the rebel MPs, Andy Appiah Kubi told JOYNEWS.

The leadership of the NPP in Parliament then came out backing the rebels’ position that Ofori-Atta must go, only that it would not be on terms proposed by the NDC side of the ailse in the motion of censure.

A strongly worded letter would also go out warning all NPP MPs to abstain from voting on the motion of censure—the party taking no risks since the whip system was unlikely to arrest rebels who would vote for removal in the secret ballot.

The drama came to a head on Thursday when the inconclusive report of the Speaker’s ad-hoc committee was debated and voted on.

“Minority’s vote of censure against Finance Minister fails” all headlines screamed minutes after the vote.

Is it now back to business or the majority MPs would now force Akufo-Addo’s hand to sack his cousin on their terms amid growing criticism of nepotism and cronyism.

The President may have nothing to lose, being in his second and final term but the MPs could pay severely for their duplicity.

The NPP had already lost several seats after Akufo-Addo’s first term and losing a net more seats would send them into opposition in the House.

The NPP, therefore, have all to prove and a lot to lose. Only a drastic move could save them, especially the initial 80 MPs who based their initial rebellion on the wishes of their constituents.

While the NPP fights to salvage the reputation of the Finance Minister, international observers are not impressed.

Moody’s and other rating agencies continue to downgrade the country.

The Brobdingnagian National Cathedral project which the government said would be privately funded has consumed more than a decent share of taxpayers cash.

Other vanity consumption projects have seen the Jubilee House’s policies draw more criticism that it may want as it seeks to lock down a $3billion IMF facility.

Ofori-Atta has boasted in the past that the administration will not seek an IMF bailout which makes the turn around being led by the same man even more ridiculous.

As the Financial Times puts it, the government “faces a rude awakening” and only decisive steps free from populism and corruption would suffice.

DISCLAIMER: The Views, Comments, Opinions, Contributions and Statements made by Readers and Contributors on this platform do not necessarily represent the views or policy of Multimedia Group Limited.
Tags:
Censure motion
Finance Minister
Ken Ofori-Atta