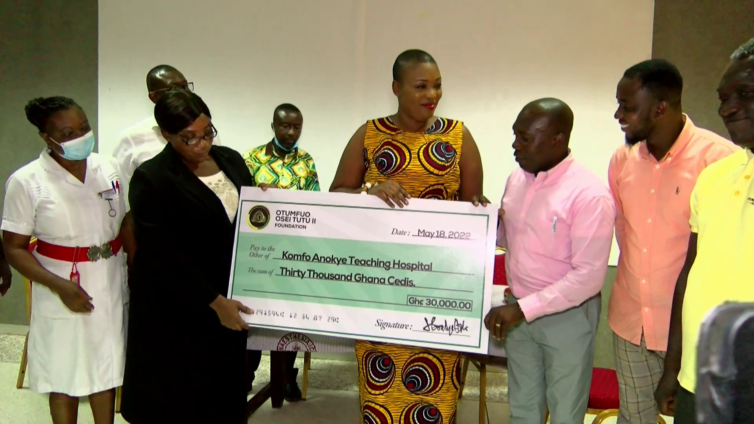 Twenty-seven hospitalized mothers at the Komfo Anokye Hospital have had their medical bills settled by the Otumfuo Osei Tutu II Foundation.

The in-patients, including those who have undergone surgical operations, had been detained at the hospital following their failure to settle their medical treatment costs.

About 30,000 Ghana cedis was released by the Otumfuo Foundation to absorb the bills of these patients.

Some patients who spoke to LuvNews say their overwhelming bills have captivated them at the hospital for months.

Ajara was referred to the Komfo Anokye Teaching Hospital about three months ago when her health condition got to a critical stage.

The pregnant mother has since not left the hospital after undergoing her surgical operation.

Her overwhelming hospital costs have imprisoned her for close to three months now.

“I have been sick for 5 years now. My stomach has protruded but I do not know the cause. My husband left me when the condition became unbearable.

“I came here for a surgical operation, but I don’t have any money to pay for my expenses,” she remorsefully recounted.

Many patients like Ajara, detained at the hospital, had whooping debts to settle.

With tears drooling down her cheek, Mercy recounted “My daughter had no anus when I gave birth to her. So we were called to come for surgery. After surgery, I told my parents and boyfriend about the cost. But, they couldn’t foot the bills. My boyfriend is a student so he is financially constrained”.

The Komfo Anokye Teaching Hospital records many of such patients annually.

Director of the Nurses and Midwives at the hospital, Georgina Afua Sam, says the hospital manages to accommodate these patients until their debts are clear.

“Once the patient is discharged and cannot settle their bills, we have a contract with them. The patient continues to lie on our bed and be provided with every healthcare they need,” she said.

In commemoration of the International Day of Families, the Otumfuo Foundation donated some items and a cash amount of 30,000 to absorb the debts of some patients at the hospital’s maternity and children’s unit.

CEO for the Otumfuo Foundation, Nana Afua Kobi Serwaa Prempeh, called on corporate Ghana to liaise with the foundation to replicate more of such gestures.

“The foundation is in line with the UN sustainable development goals. Our patron, Lady Julia Osei Tutu asked that we come to KATH to aid mothers who have been detained because of their inability to settle their bills.

“The bills have been processed and they have been released. We also brought them some gifts and some amount of money they can go home with.

“We call on other philanthropic institutions to support us in helping these mothers,” she said.