Over 220 edifices being built for the Judiciary – Akufo-Addo 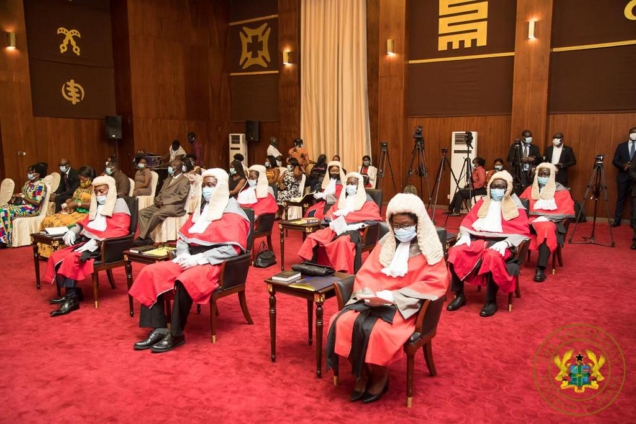 President Akufo-Addo has disclosed that work is ongoing to provide the Judiciary with a total of 243 edifices to facilitate their work in the country.

According to the President, government has already commenced the construction of 100 courthouses and accompanying residences for judges and magistrates around the country.

President Akufo-Addo noted that fifty of the facility are near completion and “should be handed over to the Judiciary soon.”

Delivering the 2022 State of the Nation Address in Parliament today, the President further noted that 121 residential units are also being built across the country.

He added that “22 new modern townhouses are being constructed at Danyame, in Kumasi, to address the accommodation challenges facing Court of Appeal Judges assigned to the Northern Sector.”

In 2020, President Akufo-Addo said government has noticed the inadequate numbers of courts in various parts of the country, resulting in citizens traversing long distances to gain access to the country’s courts.

“For example, there is no Court between Adjabeng and Amasaman in the Greater Accra Region, neither is there a Court between Adum in Kumasi and Asante Bekwai or Obuasi in the Ashanti Region.

“Indeed, it has been barely nine months since I commissioned the three-storey Court Complex at Frafraha, in Adenta, Accra, and I am reliably informed that there are already some three thousand cases pending there,” he said.

Meanwhile, President Akufo-Addo says the construction of Law House, a proposed new office accommodation for the Office of Attorney-General and Ministry of Justice, which began some 20 years ago and had not seen any progress for some years will be completed by the end of the year.

The facility is to be 12-storey edifice consisting of 10 floors above ground and two storeys underground.