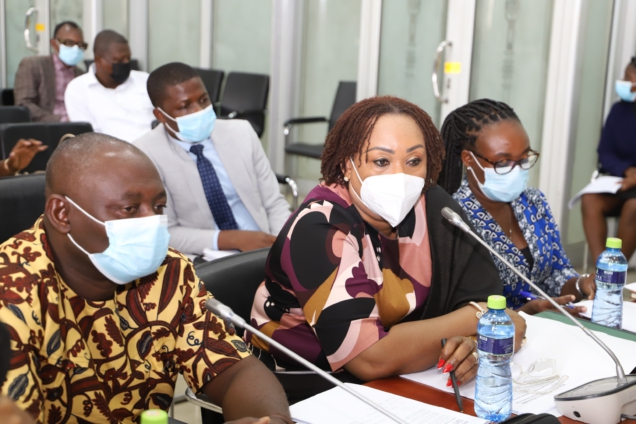 Mrs Hawa Koomson (middle) Minister of Fisheries and Aquaculture Development, answering questions before the Public Accounts Committee of Parliament in Accra. Those with her are Mr Kwasi Amo Himbson (left), Chief Director of the MoFAD and Ms Rosemary Abbey (right), the director of Finance. Picture: Ahiabor Gabriel

The Public Accounts Committee of Parliament (PAC), has directed the Ministry of Fisheries and Aquaculture Development (MoFAD) to refund $17,397 or its cedi equivalent to the government chest within two weeks.

The amount was unaccounted for as they were used for foreign travels by members of the ministry but were not backed by the relevant documents.

The Chairman of the committee, Dr James Klutse Avedzi, gave the directive when a team from the ministry, led by the Minister of Fisheries, Mrs Hawa Koomson, appeared before the committee yesterday in its sitting to respond to infractions cited against the ministry in the 2018 Auditor-General’s report.

Mrs Koomson told the committee that letters had been written to the officers with whom those infractions had occurred, and so far, receipts totalling US$20,803 had been retrieved from the officers, leaving US$17,397 as outstanding expenses.

The Chief Director of the Ministry, Mr Kwesi Amo-Himbson, said one officer, who owed US$1,750 was deceased and retrieving the money would be difficult.

The chairman of the committee, however, said family members of the deceased should be contacted and made to refund the money.

At the turn of the Ministry of Chieftaincy and Religious Affairs, the 2018 Auditor-General’s report showed that the Ningo Traditional Council had an amount of GH¢7,700 unaccounted for.

However, the Registrar of the Ningo Traditional Council, Leticia Sekyi, said their outfit never received such an amount as unaccounted for in the report received from the Auditor-General.

The committee then advised the auditors to go back and revise their report from the Dodowa audit office which conducted the audit and reconcile the findings and report back to the committee at a later date.

This directive came when the Births and Deaths Registry under the ministry of Local Government, Decentralisation and Rural Development, appeared before the commission yesterday.

He said the birth certificate was to be issued within 12 months after a child was born, however, people as old as 60 years were applying for a birth certificate, especially when they needed to travel outside the country.

A new act, he said, had been passed which would help make access to Births and Deaths Registry easier, and added that progress had been made in that direction.

The new Act 1027, which was passed in December 2020 by Parliament, replaced the Act 301 of 1965 and was intended to assign responsibility for the registration of births and deaths to Metropolitan, Municipal and District Assemblies (MMDAs).

The MMDAs, in consultation with the registrar, were required to appoint district registrars and registration officers for the district offices of the Births and Deaths Registry.

The purpose of the new act was to allow for the registration of births and deaths in the whole country and make the district registrar responsible to the MMDAs to ensure that all registration officers at post continued in employment.

DISCLAIMER: The Views, Comments, Opinions, Contributions and Statements made by Readers and Contributors on this platform do not necessarily represent the views or policy of Multimedia Group Limited.
Tags:
Foreign travels
Ministry of Fisheries and Aquaculture Development (MoFAD)
Public Accounts Committee of Parliament (PAC)