Taylor Swift took home the biggest prize of the night at Monday’s MTV Video Music Awards. She won video of the year for coolly dealing with the haters in You Need to Calm Down, from her new album Lover.

Lil Nas X and Billy Ray Cyrus picked up trophies too, while Miley Cyrus addressed her marriage in a new song.

Here are some of the more talked-about moments and performances – as well as the biggest fail – from the event in New Jersey. 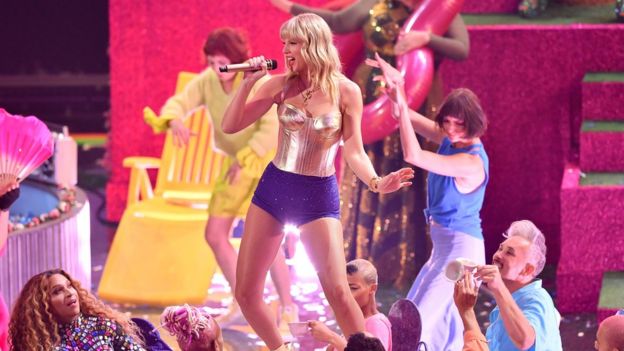 Pop fans were treated to the arrival of TSwift’s “upbeat but baggy” new album Lover on Friday, and she gave a debut live acoustic performance of its title track at the VMAs.

Before that, though, the 29-year-old kicked off proceedings with a rainbow-themed rendition of You Need To Calm Down, which saw her joined by some of the video’s stars.

The video criticised homophobia and featured cameos from high-profile LGBT celebrities. It also endorsed the proposed Equality Act, which would enshrine into law protections for the LGBT community in the US.

Accepting the award on stage, surrounded by the cast of the video, Swift appeared to aim a dig at US President Donald Trump.

She noted that the Equality Act petition, which was boosted by the video, had now attracted far more signatures than is required to receive a response from the White House. She then tapped an imaginary watch, suggesting the time had come for action.

The song also won the Video for Good award, and one of its co-stars Trinity Kardashian Bonnet – aka Josh Jones – revealed Swift had insisted they each received moon person trophies for their efforts.

Everyone in @TaylorSwift13”™s “You Need To Calm Down” music video is receiving two moonmen with their names on it for ”˜Video for Good”™ and ”˜Video of the Year.”™

Taylor Swift told the #VMAs in advance that she would not perform unless everyone got their own award. pic.twitter.com/1d2Zj9bM8s

Confirming, it seems, that these awards are not actually decided on the night. Who knew?

Bonnet, who plays Cardi B, even got a hug off the real Cardi B at the bash too. Cardi herself took home the award for best hip-hop.

2. But John Travolta gives an award to the wrong Taylor Swift 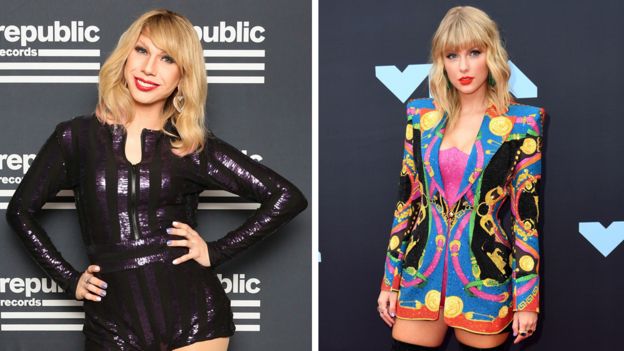 It wouldn’t be an award ceremony without a bit of drama, and that came in the form of fleet-footed actor John Travolta appearing to accidentally hand the award for best video to Jade Jolie – who was dressed in drag as Swift.

Jolie competed in the fifth series of RuPaul’s Drag Race and seemed to have Travolta in a spin.

No doubt Jolie was delighted to have carried off her impersonation so well.

Travolta is no stranger to an awards do gaffe, having managed to call frozen star Idina Menzel “Adele Dazeem” at the 2014 Oscars, and so he wisely asked his co-presenter, Queen Latifah, to read out the winner’s name this time to avoid any such fail. 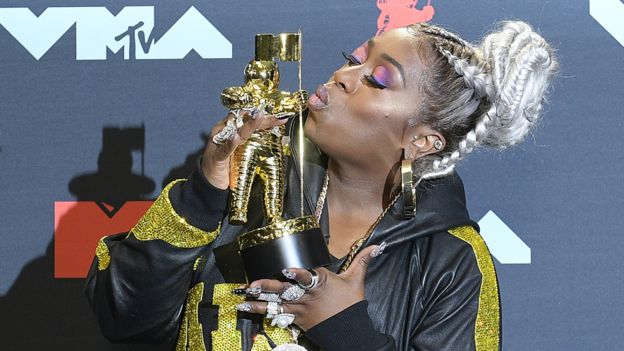 Missy Elliott performed a medley of her biggest hits (including Lose Control, Work It and Pass That Dutch) before being honoured with the Michael Jackson Vanguard Award in recognition of her influence.

The 48-year-old hip-hop star was introduced to the stage by Cardi B, who declared that “nobody deserves to be in the video vanguard more than Missy”.

An emotional Elliott said she was “humbled” to win the award, which has previously gone to artists such as Beyonce, David Bowie, Jennifer Lopez and George Michael.

The prize was named in honour of Jackson in 1991. But the channel’s coverage of this year’s event seemed to leave the controversial singer’s name off the award.

Elliott, however, did not get that memo. “I promised I wouldn’t cry this time because I cry at every awards,” she said, “But this Michael Jackson Video Vanguard Award means so much to me.” 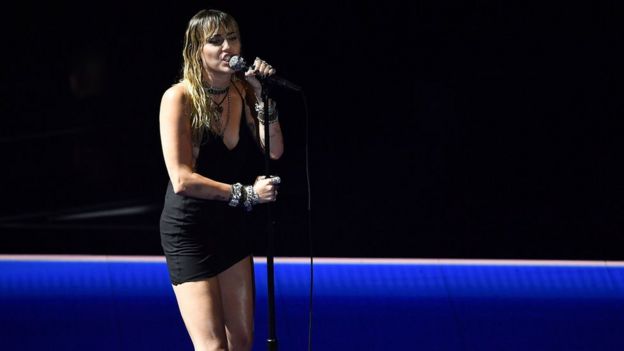 Surprise performer Miley Cyrus turned up the heat in the room when she appeared to sing about her separation from husband Liam Hemsworth in new single Slide Away (No, not the Oasis or Verve tracks).

Australian actor Hemsworth filed for divorce earlier this month, less than a year after the longstanding couple tied the knot.

The 26-year-old’s performance aired in black-and-white, with the new song containing the lyrics: “Baby, we were found, but now we’re lost, so it’s time to let it go.”

Cyrus’ parents, Billy Ray and Tish, were in the audience and applauded as their daughter left the stage, and her performance seemed to go down well online too.

.@MileyCyrus giving us chills with her #VMAs performance.

I love this song SO much, and Miley is killing these vocals #VMAs

I”™m not a Miley fan ~by nature~ and I am living for this performance. Simple, art directed, damp. 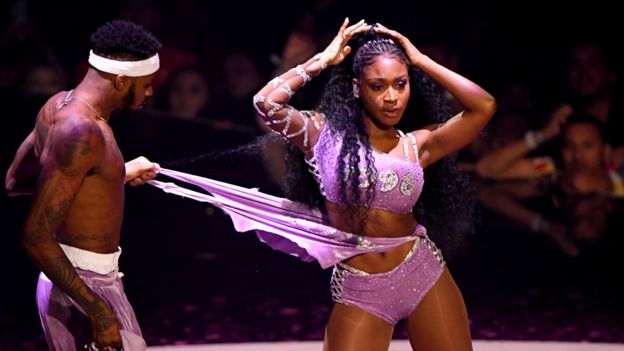 Despite all the politics, mix-ups and new music, most people around the digital water cooler seemed to be in awe of Normani’s performance.

The former Fifth Harmony singer graced the VMAs stage as a solo artist for the first time, and showcased some impressive vocals and twerk-tastic dance moves.

It took the 23-year-old’s incredible show, which began inside a basketball hoop, to beat Lizzo performing Truth Hurts and Good As Hell – in front of a giant pair of inflatable buttocks – as the most talked-about moment. 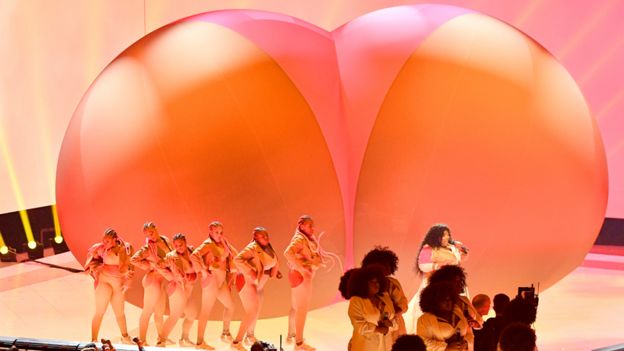 Lizzo did not hit a bum note all night (Getty Images)

6. Camila and Shawn get romantic

Like many of us, another celebrity couple, pop star Joe Jonas and Game of Thrones actor Sophie Turner, are “still waiting for that kiss tho”.

#VMAs are over, but we”™re still waiting for that kiss tho ðŸ‘€ @Camila_Cabello @ShawnMendes pic.twitter.com/0dBpbiBFa5