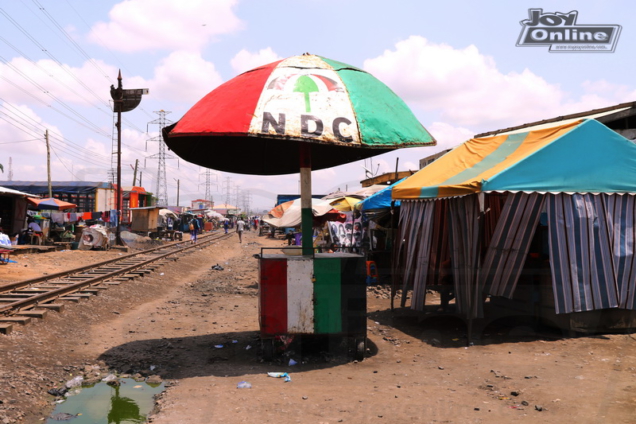 A giant mobile umbrella painted with NDC party colours meant for campaign purposes, has become the abode of an ex-convict at Neoplan Station, near the Kwame Nkrumah Interchange in Accra.

The occupant, who mentioned his name as Bismarck, a native of  Kwahu Atibie, said he dropped out of school to pursue a mechanic apprenticeship course at Nkawkaw in the Eastern Region.

Narrating the circumstances under which he went to prison to myjoyonline.com, Bismarck said a gear box got missing from the workshop where he underwent his apprenticeship, for which reason he was suspected, arrested and prosecuted.

According to him, he spent two years in jail. To his dismay, his family members rejected him after being released from prison.

For Bismarck, it was a critical moment in his life because, apart from rejecting him, his family members didn’t want to see him around the community in which they lived. He therefore packed his belongings and came to Accra to live with friends.

In Accra, Bismarck accommodation became a chslallege. He couldn’t find a place to sleep. So, when he saw the structure, he approached some NDC members who owned it and they agreed that he could sleep in the cupboard-like structure. Since then, it has been his place of abode.

The structure, which has tyres fixed underneath, is like a mini kiosk made with a metal. A giant National Democratic Congress umbrella is mounted on it for campaign purposes.