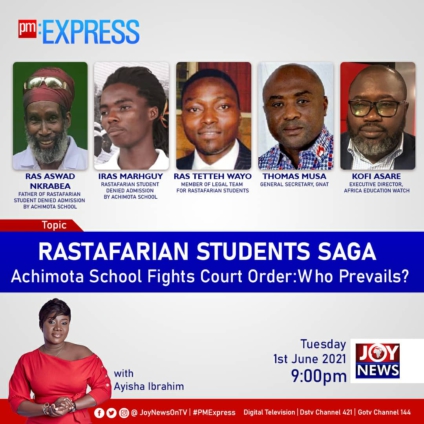 After the refusal of Achimota School to admit the two Rastafarian students on account of their deadlocked hair, they sought redress in court.

On May 31, an Accra High Court ruled in favour of the students and ordered that the two applicants be admitted into Achimota School.

However, the Governing Board of the School has, in a press statement, rejected the Court’s ruling and declared its intention to appeal the ruling.

On the back of the current happening, PM Express tonight discussed “Achimota School fights Court Order: Who prevails?”

JoyNews’ Ayisha Ibrahim, host the Father of one of the Rastafarian students denied admission and the two students, Ras Aswald Nkrabea and Iras Marhguy.

Other Panelists who will participated in the discussion are; Lawyer for the Rastafarian students, Ras Tetteh Wayo, General Secretary of GNAT, Thomas Musa and Executive Director of Africa Education Watch, Kofi Asare.