Players to watch out for as the Champions League restarts 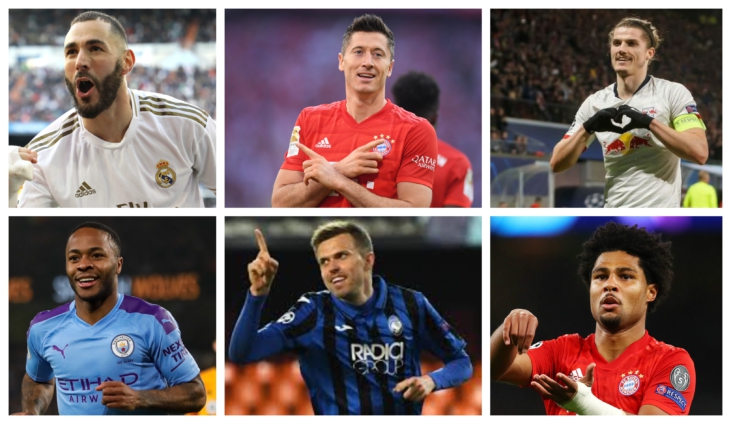 The 2019-20 Champions League is set to return tonight after five months break due to the coronavirus pandemic. Four last 16 ties are yet to be decided before the ‘World Cup style’ mini-tournament in Lisbon, Portugal.

Ahead of the first games tonight, below are six players you should look out for aside the usual suspects, Lionel Messi and Cristiano Ronaldo.

Robert Lewandowski has been in a sizzling form for Bayern Munich in the Champions League and the Bundesliga both pre and post lockdown.

Lewandowski netted 34 goals in 31 Bundesliga appearances with 9 coming after the restart. The 31-year-old has 11 goals in the Champions League and will be hoping to win the top scorer award.

Aside Lewandowski in the Bayern Munich team, the biggest threat in their attack is the German International.

He dominated the headlines after scoring four goals against Tottenham Hotspurs in the group stages.

Gnabry also put two past Chelsea, increasing his tally to six in the competition. The 25-year-old scored 12 goals and assisted 11 in the Bundesliga which is fairly good.

Atalanta’s Josic Ilicic might be heartbroken, depressed and desolated after he allegedly caught his wife cheating with another man.

Ilicic, who has missed several matches since the restart, has been ruled out of the impending match against Paris Saint-German but might be available in subsequent matches should the Italian side beat the French champions.

In spite of his troubles, Iličić is only the third player to score 5+ goals over two legs of a Champions League knockout tie (against Valencia), after Lionel Messi for Barcelona vs Bayer Leverkusen in 2011-12 (6) and Cristiano Ronaldo for Real Madrid vs Bayern Munich in 2016-17 (5). He’s scored 15 goals and provided 8 assists in the Serie A.

With Kun Aguero injured, the responsibility will be on the Englishman as they seek to eliminate 13 time champions. Sterling has scored 20 premier league goals this campaign with 9 of those coming after lockdown. He also has five goals to his name in the Champions League with further 4 assists.

21 goals, 8 assists and finishing as the second top scorer behind Lionel Messi in La Liga is impressive.

The Frenchman’s seven goals after the break propelled Real Madrid to the top of the table as they ultimately clinch the title. In the Champions League, he has scored four goals and set up two more in seven games.

For Real Madrid to overturn their 2-1 deficit against Man City and progress all the way to the final, they will need Benzema to step up once again.

Sabitzer might not be the first name mentioned of influential players at Leipzig but his tremendous contribution to the team cannot be overlooked.

The Austrian midfielder’s pace, pinpoint crossing ability and goals has helped the German club in the Bundesliga and the champions league. He has scored four goals and provided two assists in the competition.

DISCLAIMER: The Views, Comments, Opinions, Contributions and Statements made by Readers and Contributors on this platform do not necessarily represent the views or policy of Multimedia Group Limited.
Tags:
Champions League
Joy Sports