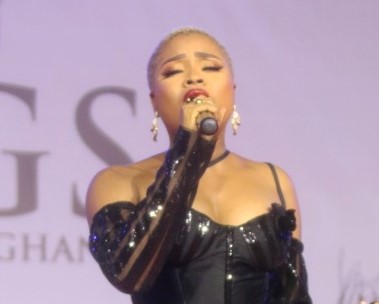 Singer Adina says she wants to keep performing and hold on to her career even during the times she is pregnant.

According to her, she wants to change the mind of many women who are delaying birth due to their respective careers.

Speaking on Ahosepe Xtra on Adom TV, Adina stated that she does not believe a woman needs a pause in a career because of pregnancy.

“I think apart from the entertainment industry, even in offices people don’t want to employ women because of maternity leave and all. For me, I want to prove that thing wrong. I don’t believe because you are a woman you have to take a full break,’ she said.

The ‘Too Late’ hitmaker said she told Sister Sandy, the host, that she would love to perform while pregnant till her doctor says otherwise.

She added that she would also like to return to performing as soon as she is allowed to after childbirth.

Adina was speaking on the Mother’s Day special show where she also showed appreciation to her mother for the sacrifices she made to ensure the singer stayed alive after being born in Liberia shortly before the civil war.

For her act of selflessness, Adina remarked she will be forever grateful to her mother and work harder to ensure her sacrifices are not in vain.