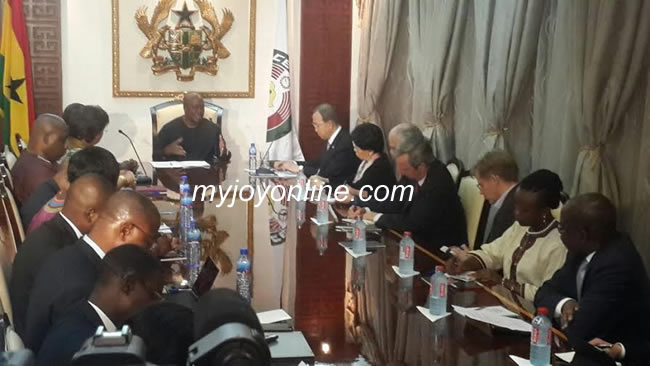 President John Mahama has asked for the United Nation’s support to help restore the public health systems of the three countries most affected by the deadly Ebola virus.

President Mahama made this recommendation during a meeting with UN secretary General, Ban Ki Moon, ahead of the UN boss' two day solidarity visit to Liberia, Sierra Leone and Guinea the three countries most affected by Ebola.

Mr. Ban will also visit Mali which is under a 42-day observation period before it is declared Ebola free.

“I believe that your presence there will raise their spirit and be an encouragement on them to continue the fight against this disease that has claimed so many lives. Many months after the outbreak these countries had felt very isolated", said President Mahama.

The President commended UNMEER for its effort to control the disease.

"I believe we are not out of the woods yet. I believe the UN missions work will go on even after we have finished the last case. The UN mission will have a role to play [to] bring the public health systems of these countries back in a shape that allows it to respond better in future when epidemics like this occur”, the President added.

On his part UN secretary General Mr. Ban hailed Ghana’s role which has enabled the international community’s ability to respond faster to the Ebola crisis.

He said the UN is committed to helping the three countries worst affected by Ebola.