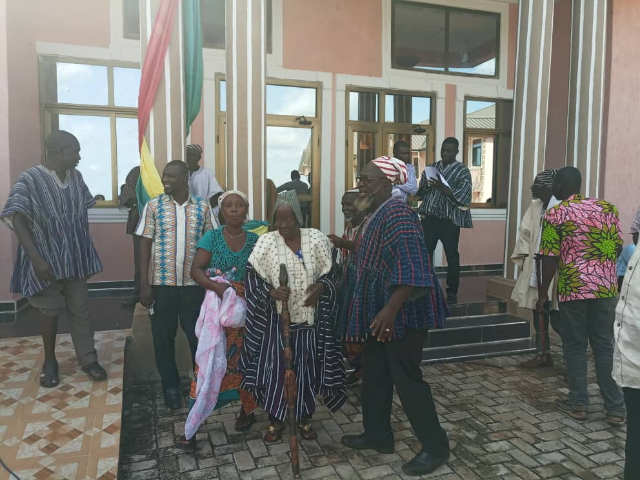 Over 400 households in communities in the North East region are to be affected by the construction of the Pwalugu multipurpose dam.

An ongoing Environmental and Impact Assessment Survey will determine the exact area to be affected and the victims will be consulted and involved in resettlement planning.

This was disclosed during a visit on Tuesday by executives of the  Volta River Authority(VRA) and the Ghana Irrigation Development Authority (GIDA) to the overlord of the Mamprugu traditional area, Nayiri Naa Bohagu Mahami Sheriga, at his palace in the regional capital, Nalerigu.

The delegation was there to officially inform the chief about the project and as well start consultations with his sub-chiefs on land acquisition and resettlement process.

The Project Manager, Kwaku Wiafe said, the resettlement will be done to the best standard and that lesson learnt from similar projects, such as the Akosombo and Bui dams will be applied.

According to him, the resettlement plan will involve extensive deliberations with multiple stakeholders with the affected people at the forefront.

The Pwalugu Multipurpose Dam is a government project estimated to cost nearly one billion USD.

It covers Irrigation, hydropower and flood control all expected to complete by 2024.

The project components involve; a dam with an elevation of 165m near the Pwalugu Bridge on the White Volta River and with a maximum reservoir area of 350 km2, a powerhouse consisting of two turbines with 60MW of installed capacity and 16.5 MW of firm continuous capacity; an Irrigation Scheme consisting of a 12m high for 20,000ha of land, and a 15km overhead line for export of power to an existing transmission line.

Managing Director of NEDCO/VRA, Osman Ayuba who led the delegation, told the Mamprugu chief the project will be sited between Wurugu, Kurugu and Yagaba, all in North East  region.

Mr. Ayuba briefed the chief on the many benefits of the project to the economic growth of the northern sector.

He said the project will generate lots of employment, increase the income levels of the people, and improve the electricity coverage.

Referencing the recent incident which some 20 persons died due to flooding, the MD said the project will end the perennial floods caused by the Bagre dam spillage.

The Overlord welcomed the delegation and expressed joy with the idea of and also offered his firm blessing.

Speaking through his senor most elder, Taranaa John Wuni, the Naa Bohagu Sheriga said he was particularly delighted the project will provide employment opportunities for his people and sincerely thanked the president for bringing such a huge national venture to the Mamprugu land.

The Pwalugu Development Committee comprising the Office of the Vice president, Ministries of Finance, Energy, Agricultural and Attorney General, will provide overall guidance to the project.

The North East Regional Minister, Mr. Solomon Boar said the project will reduce unemployment, tackle poverty and bring rural-urban migration to the barest minimum in northern Ghana, as according to him, over 1000 jobs will be created for the youth.

He revealed, President Nana Akuffo Addo will be in the area in November to cut sod for construction to begin early 2020.

The Minister also expressed excitement and urged for support and patience of the people in and around the catchment area.

DISCLAIMER: The Views, Comments, Opinions, Contributions and Statements made by Readers and Contributors on this platform do not necessarily represent the views or policy of Multimedia Group Limited.
Tags:
North East Region
Pwalugu Dam