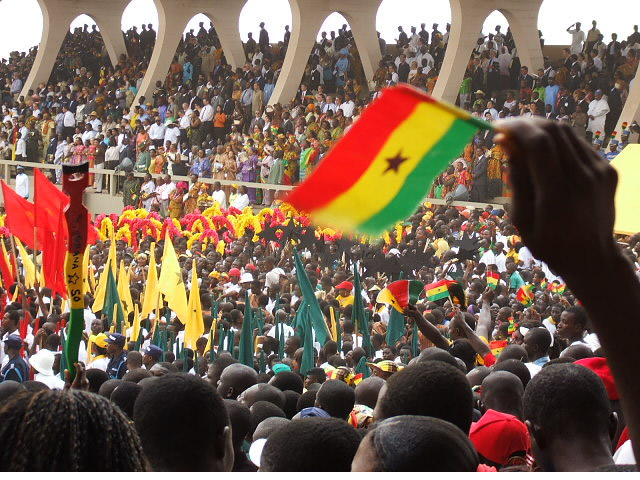 I've been seeing some very dilapidated Ghana flags flying on some lamp posts in Accra. Not uncommon, unfortunately. We really should treat our national flag with greater respect. The thing is some of them are flying at half-mast, and I'm wondering: were they lowered to half-mast initially for some state event? So are we still mourning that event? Or did they slide down to half-mast by themselves in a state of inbuilt political agitation?

Speaking of Accra, have you noticed that there seems to be a huge amount of tiny cars on our roads? Some of these cars are small enough to put in your pocket. They have a very tight turning circle, which means they are highly maneuverable, and we should be able to utilise this tight turning circle to our advantage in traffic and especially when parking. And yet….these tiny cars are amongst the worst culprits when it comes to traffic offenses. They are parked like they are several sizes bigger than they actually are, and they are driven like they deserve a larger road space than a tipper truck. It's in our genes you know.

The other half was not well recently and she was given some nasal drops to use. Nothing strange about that (except for the fact that she did not self-medicate which is a minor miracle). But it is the way she has been sniffing/inhaling the nose drops that has caught my attention. Ei! She's been sniffing the drops like a professional! You know what I mean, right, when I say 'professional'? Normal people (like me) always cringe a little when we have to insert the tube up a nostril and we hesitate and pause before we squeeze. And then we do a whole jiggle and dance when the liquid enters. But madam is doing this thing twice a day in mid-conversation, no shaking, no waiting! And, I swear, her eyes glaze over after she has had a 'hit'! Eish! You think you know a person….

Speaking of the other half, I overheard a snippet of a conversation the other day (accidentally of course). Someone was saying to another person, "You would notice if your wife went bad-looking, right?" What?? It brought several scenarios to mind, none of which made any sense to me. Noticing when your wife became bad-looking? Would I be man enough to mention it? And I think it would be 'if' not 'when', innit? Of course, in the middle of a wild argument (in my dreams; I wouldn't dare), you just might start to think (only think!) she's becoming bad-looking. Then again she's nearly human, which is more than can be said for most people!

I heard only recently that a certain airline has closed its office in Accra. They haven't stopped flying here mind you. But they can now be reached only at the airport. I was quite sad to hear it. I've had an excellent relationship with this office from the 90s to date. I even deejayed at a couple of staff Christmas parties when the crew that happened to be in town played a great part. They once had a young boss who was notorious for turning up on Monday mornings in dark glasses. Apparently his eyes were not fit for public consumption. I shall always treasure a Frank Carson CD (It's A Cracker) he gave me for my 'great spinning'! I think I only ever played that CD once. Too British.

I'm still watching old movies on DVD you know. Anyone remember Ruthless People with Danny DeVito and Bette Midler? Hilarious! Especially since the plot is worthy of an Alfred Hitchcock thriller. Too many threads to mention here, but this line is a classic: "Well, let's face it, she's not Mother Teresa. Gandhi would have strangled her." And when a detective says, "This could very well be the stupidest person on the face of the earth", and the person he is referring to is standing beside an actual clown….

The Wild Geese from 1978? A film about mercenaries hired to release an imprisoned African leader (Winston Ntshona). Richard Burton, Richard Harris, and Roger Moore in the lead roles; charm personified. As the mercenaries are recruited you can almost tell who will not be coming back from this mission. I only just realised that this is the first movie I saw with King T'Chaka (John Kani) from Black Panther! He played a black mercenary called Jessie in The Wild Geese. His financial status is 'wiped out', and he can't even afford a haircut for his very unruly afro. "Can you advance me £20 sir? I have a lady barber who charges by the inch." There's a white Catholic father they meet in a village who sends them on their way with, "Good luck to you godless murderers" after he's been told to get on his ass. No, truly, he's riding a donkey. When a sergeant major says, "You're not dead until I tell you you're dead, understand?", you can begin to appreciate the mercenary more.

Good Morning Vietnam with Robin Williams is one of the best movies ever made, and the main reason I wanted to do radio. Period. "You're in more dire need of a b*** j** than any white man in history." Enough said.

I like hymns generally. Do you? I have a question. Are hymns still being written and produced? In the modern age? If not why not? So we are stuck with what we have in the traditional hymn books we find in orthodox churches? That's a pity. I hope we never get bored with those hymns, if there are no new ones on the way.

Would you believe me if I told you that this paragraph started out as a rather nasty comment on the effects of skin bleaching (or toning as some would rather quaintly label it)? And yet somehow I now find myself asking you whether we should be wearing gloves when we use common household bleach? Should we? That's pretty powerful stuff, innit? And yet we happily use it for cleaning purposes with no caution. How dangerous is it? I heard a description the other day that made me smile. Someone asked if a particular brand of household bleach was strong enough for a particular purpose. "Strong?", was the answer. "It's lethal! You can hear it seething in the bottle on a still night!"

My son is in university in the Netherlands as regular readers of this blog (yes, they exist) will know. When I visited him this past June (remember, regular readers?) I noticed that as we walked round the city he was moving at a very brisk rate. My friend! I'm on holiday! I asked him what was going on, because I wanted to make sure he was not avoiding his landlord….or a girlfriend….or a lecturer. He said cycling and walking everywhere seemed to have made him a faster walker. It has. Because when he visited us in Ghana this past July/August I noticed that his pace was significantly slower. Of course, in Accra it's all by car….

Recently I was eating some chicken when I realised that I was painstakingly taking the skin off before chomping down on it. Over the last few years it has been steadily ground into my brain (what's left of it; I've been married for 23 years) that chicken skin is BAD for my health. I just could not believe that I have finally reached the stage where I take the skin off automatically. Chicken tastes good with the skin on, especially when it's crisp. Besides a chicken without its skin looks undressed. And now the dogs get 'my' skin as a snack. Oh baby…..

Have you noticed those men who follow their spouse into church and look quite lost as their wife dithers over where to sit? You must have; they look quite lost and bewildered. I saw one such couple the other day and I wondered if it was the same for other aspects of their life. You know what I mean, right? Wives who control everything, and husbands who are quite happy to let them. For some strange reason I sat there thinking, "In church too??" Find a seat man, and let her stand if she's wasting time! That's just rude of me. And to be fair the man seemed quite to content to stand and wait. Although the way he collapsed into a seat once his wife had made up her mind….poor git must have been exhausted!

I used to be a 'following' husband but I have learnt how to….not be. Which might make me sound macho, right?! Meanwhile I'm the kind of husband who rarely gets past evil intentions in the bedroom….

Speaking of evil intentions, what do you do when you find yourself at an event, sitting between your other half and a lovely young thing, a stranger? And I mean lovely. And I mean young. Your eyes keep straying to the stranger, and you even attempt a strangled word or two of conversation. Hmmmm. Some things should not be attempted without anesthesia.