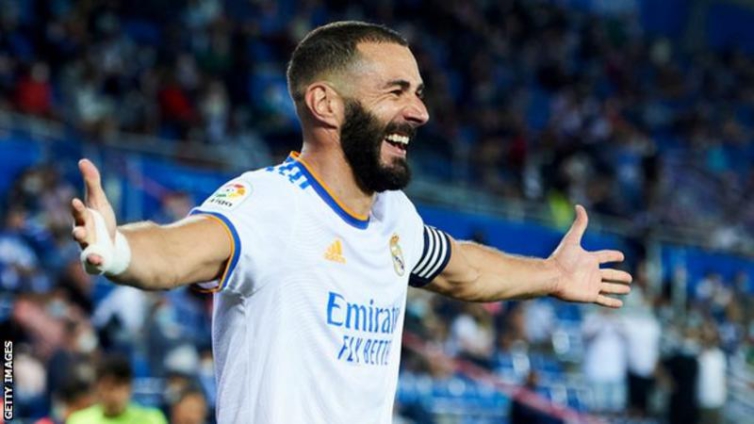 “When you play with a guy who scored 50 or 60 goals a season, of course, you are at the service of the player because he is someone who scored a lot,” Karim Benzema said.

“I had to adapt; I adapted. He left. So it was down to me to make a step forward and show that I could make the difference.”

These were Benzema’s words when asked about his roles at Real Madrid with and without Cristiano Ronaldo.

The France forward will lead Real’s attack in the second leg of their Champions League quarter-final against Chelsea on Tuesday, having scored a hat-trick in last week’s first leg at Stamford Bridge. It was his second hat-trick in successive European club games, having hit three as Paris St-Germain were eliminated in the last 16.

Benzema has been in prolific form despite off-field problems – he is appealing against a conviction for blackmail, having been found guilty by a French court last November.

On the pitch, the striker has scored 11 Champions League this season – a total bettered only by Bayern Munich’s Robert Lewandowski, who has 12.

Benzema, 34, spent years in Ronaldo’s shadow at the Bernabeu. Yet while he was once primarily a creator for others, the Frenchman has now emerged as Real’s main man – and one of the most clinical attackers in Europe.

Benzema is scoring frequently, but it shouldn’t be overlooked that he is also scoring high-quality goals. The striker is producing finishes that aren’t possible for many forwards on a technical level, both with his feet and his head.

It hasn’t always been this way. The Frenchman used to be criticised heavily for his finishing. He was really struggling as Ronaldo began his final season with Real. In a 2-2 draw against Valencia in August 2017, Benzema missed six big chances – and was booed by large sections of the Bernabeu.

Those struggles continued throughout that season. During 2017-18, Benzema underperformed his La Liga expected goals (xG) tally by 8.97 goals – in other words, he scored nine goals fewer than would be expected from the chances he had. Contrast that to this season, where his 24 La Liga goals have come from an xG of 19.85.

Benzema’s delicate touch and control has always been a standout feature of his game but now he is using it to greater effect inside the penalty area.

The statistics bear that out. In 2017-18, Benzema managed 93 touches in the opposing penalty area. This season, he is set to pass that comfortably, having reached 86 with more than a month of the campaign still to go. And he is producing the skill to go with it – scoring from chances that would elude many forwards.

It used to be common to see Benzema playing with his back to goal and looking to bring Ronaldo and others into play. He still does that sometimes, but the Frenchman now more often collects the ball facing the goal.

In the four years since Ronaldo left, Benzema has changed tack – lining up as Real Madrid’s central striker but often pulling into the inside-left channel. From there, his decision-making takes over.

For all of his technical traits, one of Benzema’s greatest strengths is his football intelligence. When he rolls inside from the left, he knows exactly what he needs to do next.

He proved it when France came from a goal down to beat Spain in the Nations League final last October. After gaining a half-yard of space inside Spain’s right-back Cesar Azpilicueta, Benzema quickly computed that there were no other team-mates in a better position to score, so he whipped the ball over goalkeeper Unai Simon from an audacious angle to score a vital equaliser.

Then with 10 minutes left, and the game poised at 1-1, Benzema got himself into a similar inside-left position. This time, he detected Kylian Mbappe’s run on the right side of the box and created a chance for him to win the match and the trophy.

Benzema is so effective from this area of the field. In La Liga this season, 48% of Benzema’s touches outside of the box have come down the left third of the pitch.

His positioning has also contributed to a potent partnership with Brazilian left winger Vinicius Junior, who has 17 goals in all competitions for Real this season.

Benzema and Vinicius have combined for 18 goals this season – that is, where one has assisted the other to score. A common ploy has been Benzema dropping deep to pull an opposition centre-back out of the defensive line, which creates space for Vinicius to use his electric pace to run in behind off the left wing.

“There are forwards who do not touch a ball during the match, then comes the 87th minute in which they score and they are super happy. Personally if I don’t contribute much with the ball, but I score in the 90th minute, I’m disgusted.”

This is a Benzema quote from 2017 – and despite his vast improvement as a goalscorer in the five years since, the essence of those words still shine through in his play today.

He is still often the central link man for many of Real Madrid’s attacks – as he showed against Chelsea at Stamford Bridge last week. His superb finish was only one part of his contribution to the first goal as he twice linked the play in the build-up too.

In fact, Benzema is not only La Liga’s top goalscorer this season but he is also the top of the assists chart with 11, showing the complete number nine he has become.

Benzema is maintaining his classical traits as a playmaker and extracting the best from his team-mates, but now combining this with phenomenal goalscoring numbers. It may yet carry him into contention for the Ballon d’Or.