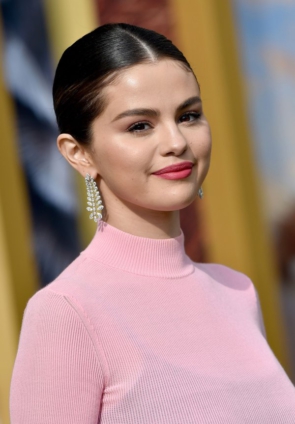 Selena Gomez is hosting SNL for the first time.

During her promos for her appearance, she was joined by cast members Aidy Bryant and Bowen Yang, along with Post Malone who serves as the episode’s musical guest.

For Gomez’s monologue, she started off by explaining that she’s worked with some Hollywood icons. “I actually started acting when I was 7,” she said, throwing it back to her Barney days.

She mentioned being on Only Murders in the Building, which also stars Steve Martin and Martin Short. “It’s cool being around two SNL legends.

“When I found out I was hosting, I immediately asked for their advice,” she said. “Steve said, ‘Trust no one.’ And Marty said, ‘I think Steve Martin has been using my credit card.’”

After doing a spot-on Miley Cyrus impersonation, she revealed she’s single and is looking for anyone to fit the part. That segued into a bit where SNL cast members tell Gomez they’ll be her new partner.