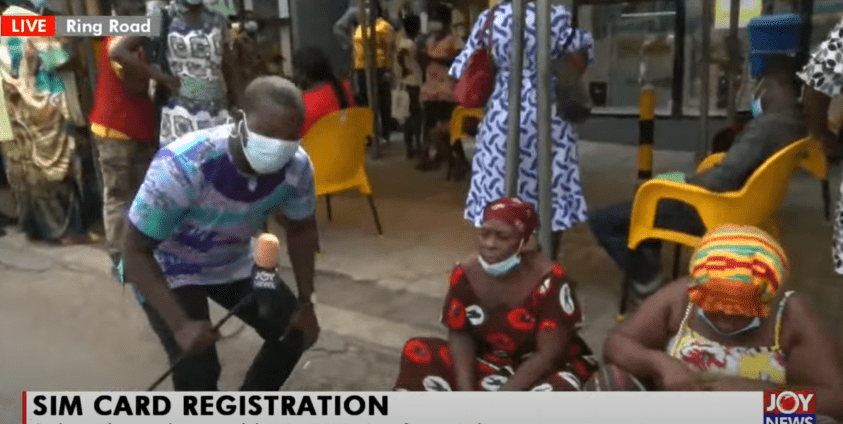 With less than two months left to the end of the sim re-registration exercise, many mobile phone users are pleading with the Communication Ministry and the National Communications Authority to extend the deadline for the exercise.

Speaking to JoyNews’ Blessed Sogah, some mobile phone users said they have to queue for hours and sometimes days to get their sims registered.

“Everywhere you go you are very stranded, wasting a whole lot of days here is very frustrating. They should extend the days so we could have time to do this. For some of us we are supposed to go to work or do our normal routine, but we are stuck here throughout the day,” one mobile phone user said.

Others blamed the poor network services at the registration centers explaining that users could be at the centers for hours but are unable to register because the network aren’t stable.

“So we are pleading with them to do something about the time,” one lady told JoyNews.

At a registration center in Nungua, one mobile phone user explained that she and others would officially resume work next week. They are however unable to register their sims.

She pleaded for an extension. “They should give us enough time so we can do it.”

This appeal comes days after the NCA announced measures to ease the human congestion which has characterised the ongoing nationwide SIM re-registration exercise.

As part of the measures to address the challenges, the NCA had announced the “deployment of additional registration points commensurate with the subscriber numbers of each MNO to ease congestion”.

According to the Authority, “outlets such as distributor shops, retail centres and other agent touchpoints across the country are being used for the SIM registration exercise”. The NCA has therefore called on subscribers to embrace the move to make the process smoother.

However, days after the directive was issued, some customers say they still have challenges.

JoyNews’ checks across many registration centres in Accra revealed that scores of registrants were unsuccessful in completing their registration process due to varied reasons, including congestion and other associated network challenges.

Following complaints from customers, the National Communications Authority (NCA) promised that “there will be deeper collaboration to ensure that all associated challenges with the SIM Card Registration exercise are addressed promptly”.

After a crunch meeting between the Board of Directors of the Authority, Chief Executive Officers of Mobile Network Operators (MNOs) and the developers of the SIM Card Registration Application, the stakeholders have resolved “that the MNOs will publish the locations for the SIM Registration for subscribers to locate centres close to them easily.”

The NCA has also announced “the deployment of various ad-hoc registration points at various public areas including lorry parks, churches, mosques, etc to ease the congestion at the customer care centres”.

The Authority said regarding this policy, announcements will be made to update the public on the availability of such ad-hoc registration points in their respective localities.