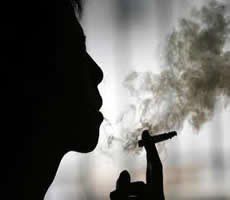 Smoking in public places has been banned following the passage of the Public Health Bill by Parliament on Wednesday.

However, the bill is to be presented to the President for his assent.

The Deputy Minister of Health, Mr. Rojo Mettle-Nunoo, moved the motion for the Third Reading of the bill after it had been taken through a second consideration on the request of the Chairman of the Health Committee of Parliament, Alhaji Muntaka Mohammed Mubarak.

The new bill has brought together in one piece of legislation colonial enactments on infectious diseases, mosquitoes, quarantine, vaccination and public nuisance, as well as modern enactments on tobacco, food and medicines.

Clause 58, which forms Part Six of the bill, deals with tobacco control measures and prohibits smoking in public places.

Other provisions on tobacco control are the issue of health warnings on cigarettes, sale of tobacco, packaging and labelling of tobacco, advertising of tobacco and tobacco products, among others.

It also stipulates that the Food and Drugs Authority (FDA) is the regulatory agency to deal with tobacco matters and that it may appoint inspectors and analysts to carry out its functions.

Considering the harmful effects of smoking on health and the culture of associating smoking with social success, business advancement and sporting process through advertisement, the 192-member states of the World Health Organisation (WHO), including Ghana, adopted a Framework Convention on Tobacco Control which bans advertisement and sponsorship by tobacco companies.

The convention enjoins member-countries to take administrative; legislative and any other means to curb the incidence of smoking and reduce the hazards associated with smoking.

The entire bill focuses on keeping people healthy and improving health, instead of treating diseases and disorders among individuals.

It recognises all the factors that contribute to health in respect of housing, employment and more immediate risk factors such as nutrition, smoking and inadequate physical activity.

Part One of the bill, which is on communicable diseases, provides for the declaration of infected areas and for the consequences of such declaration.

For example, medical officers are given authority in this part of the bill to organise the disinfection or destruction of buildings and animals to prevent the spread of infectious diseases.

Part Two of the bill deals with vaccination and provides generally for the appointment of public vaccinators, usually medical officers, and their functions.

The Third Part is on quarantine and regulates measures that need to be taken for the prevention of the introduction of infectious or contagious diseases into the country.

Part Four deals with provisions on vector control, with the destruction of vectors, including mosquitoes, forming an important element in the control and prevention of malaria.

Part Five caters for environmental sanitation, with clauses 50 to 57 dealing with matters including the selling of unwholesome food, noxious trade and the dumping of garbage at unauthorised places.

Part Seven deals with food and drugs, with Clause 78 establishing the FDA to provide standards to regulate the sale of food, drugs, herbal medicine products, cosmetics, medical devices and household chemical substances in the country.