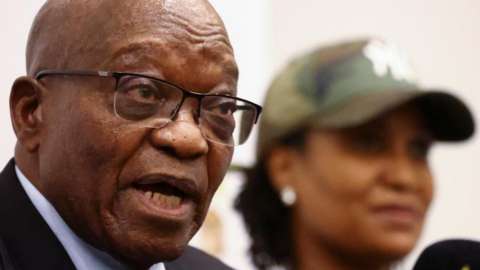 Jacob Zuma stepped down from the presidency in February 2018

South Africa’s Supreme Court of Appeal has ordered former President Jacob Zuma to return to prison after upholding an earlier ruling that his medical parole had been unlawful.

But it is not clear if he will spend any more time in jail.

The 80-year-old was given a 15-month sentence last year for contempt of court over his refusal to testify during an investigation into corruption.

His imprisonment prompted violent protests in KwaZulu Natal province and other parts of South Africa that left more than 300 people dead.

Zuma was released after two months in jail, after his lawyers argued that he had an undisclosed terminal illness.

In their unanimous judgement on Monday, the judges said that prison authorities should decide if the time the former president has unlawfully spent out of prison should count towards his sentence or not.

The former president’s lawyers had argued that Zuma needed medical care that could not be provided in prison and now may take the matter to the Constitutional Court.

It’s a legal matter but one that has had political implications in the past. There are some concerns that his return to prison may lead to a repeat of the unrest seen last July.

DISCLAIMER: The Views, Comments, Opinions, Contributions and Statements made by Readers and Contributors on this platform do not necessarily represent the views or policy of Multimedia Group Limited.
Tags:
Ex-president
Jacob Zuma
Jail Sentence
South Africa