South Africa's Jacob Zuma would do anything for the Guptas - Zondo report - MyJoyOnline.com 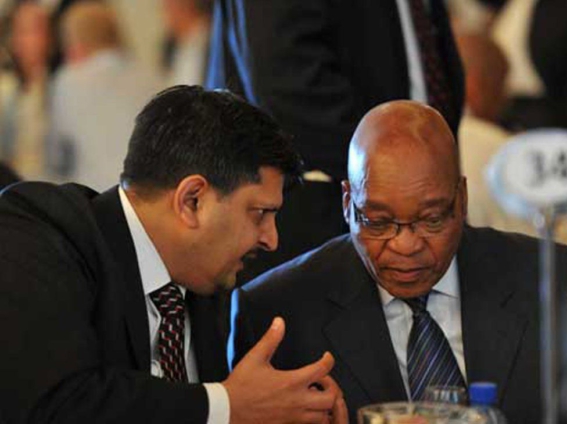 South Africa’s former President Jacob Zuma “would do anything” that the wealthy Indian-born Gupta family of businessmen “wanted him to do for them” from early in his first term, corruption investigators have concluded.

The commission investigating allegations of widespread corruption in South Africa during Zuma’s nine years in power, known as “State Capture”, says the former president placed the interests of corrupt associates ahead of those of his country.

Further, it says that the Guptas identified Zuma as someone whose character could be used against the people of South Africa to advance their own business interests.

These scathing conclusions were revealed over more than 1,000 pages of this fourth part of the commission’s report – released on Friday – which is led by South Africa’s Chief Justice Raymond Zondo.

Central to the commission’s investigations has been the claim that one family bought their way into the most influential organs of the state via Zuma.

Both Zuma, who served as president from 2009 until 2018, and the Gupta family, who came to live in South Africa in 1993 just as white-minority rule was ending, deny any wrongdoing.

Because this commission is an inquiry it has no power to prosecute, however an amended regulation passed by President Cyril Ramaphosa last year allows law enforcement agencies to access information gained at the commission.

The Zondo commission’s latest report details how Zuma hired and fired ministers central to the running of the country’s economy at the behest of the Gupta family.

In particular it describes the 2015 sacking of Finance Minister Nhlanhla Nene because he would not comply with the Guptas’ wishes, and the appointment of two subsequent ministers – Des van Rooyen, and Malusi Gigaba – who were friendly to the family’s interests.

“The reasons that President Zuma gave” for Mr Nene’s sacking “made no sense whatsoever”, the Zondo report says.

Its fourth report also details a web of corruption at the state electricity utility Eskom, culminating in key members of the company’s executive being put in place by the Guptas.

Having appointed friendly board members, the aim was to “then divert Eskom’s assets to the Guptas’ financial advantage”, Judge Zondo’s report found.

Eskom has had to receive several taxpayer-funded bailouts because of poor management, with South Africans experiencing frequent power cuts since 2008.

The report recommends that criminal prosecutions of former Eskom Chief Executive Matshela Koko, and Chief Financial Officer Anoj Singh be considered by the country’s law enforcement agencies. They have both previously denied any wrongdoing.

Eskom has said it welcomes the report’s findings and that it has “set up a project team… to ensure that the report is reviewed, understood and appropriate actions are taken”.

Some of Judge Zondo’s most scathing words were for the ruling ANC party, asking something many South Africans have asked themselves: Where was their government when this corruption was taking place at state-owned entities?

“Were they aware of everything but lacked the courage to stop President Zuma and his friends, the Guptas, in what they were doing? Were they looking the other way?” the report asked.

At the time of writing there is no comment from former President Jacob Zuma, but he has rejected past editions of the report, saying they were not worth the paper the findings were written on.

Zuma defied an instruction to give evidence to the commission saying it was biased against him, which led to him being imprisoned for contempt of court last July.

Months later in September he was released on medical parole, before being ordered back to jail by the high court in December. Zuma has appealed against the decision and so remains on parole.

While this report confirms what many South Africans had long suspected, the impact of seeing it in black and white cannot be overstated.

After years of denials from Zuma and his associates, this is in a sense a collective vindication.

But with it comes a deep sense of betrayal – that those who South Africans trusted to look after them after the brutality of apartheid, instead looked after themselves.

There is still one final edition of the commission’s report to be released, expected in June.

Whatever its findings, it promises to be a watershed moment for South Africa’s fledgling democracy.