Novak Djokovic says queuing for bread in difficult times in Serbia gave him the inner steel needed to fight back to win an eighth Australian Open crown.

Djokovic was struggling physically and mentally before he recovered to beat Austria’s Dominic Thiem in five sets.

“I came from literally nothing and difficult life circumstances together with my family and with my people,” he said after his record-extending title.

“That’s why I managed to find that extra gear.”

When Djokovic, who was born in the Serbian capital of Belgrade, celebrated his 12th birthday in May 1999 a decade-long crisis was tearing the Balkans apart.

More than 20 years later, there is still tension over how Nato bombed Serbia for 11 weeks in an effort to push Serbian forces out of Kosovo, accusing them of atrocities against ethnic Albanians.

“My upbringing was in Serbia during a difficult time, an embargo in our country where we had to wait in line for bread, milk, water, some basic things in life,” he said.

“These kind of things make you stronger and hungrier for success in whatever you choose to do.

“That probably has been my foundation.

“Going back to that, reminding myself where I came from always inspires me, motivates me to push even harder.”

With a huge Serb population living in Melbourne, hundreds watched Djokovic’s win on a big screen outside Rod Laver Arena and many celebrated by dancing in Garden Square.

Will Djokovic catch up with Federer?

Djokovic has made no secret that he wants to eclipse Federer and Nadal to eventually finish as the greatest of all time in terms of Grand Slam titles.

He has won more Australian Opens than any other player but said he will not be able to “comprehend” his achievements until he retires.

“The intensity of the tennis season, especially if you’re committed to play full season, which I am for many years already, doesn’t allow you to kind of reflect and enjoy the success of a Grand Slam trophy,” he said.

“Already in a few weeks’ time I’ll be playing a tournament somewhere else in a different part of the world.”

Former Wimbledon champion Pat Cash said it is hard to predict who out of the ‘Big Three’ will eventually be viewed as the greatest.

“Federer has a chance – probably one more real chance – of getting one more title at Wimbledon. I still think he is up there in the best players on grass. He’s still good enough,” BBC Radio 5 Live pundit Cash said.

“But the other couple of guys look like they are carrying on. Every tournament is different depending on lead-ups and injury. At this stage any little injury or setback is massive for the older guys.

“You look at who he [Djokovic] has beaten in finals, he has beaten Tsonga and Anderson, but the majority of them have been against Murray, Nadal and Federer. He has beaten those guys more or less all the time.

“That’s one heck of a way to rack up those Grand Slam titles. 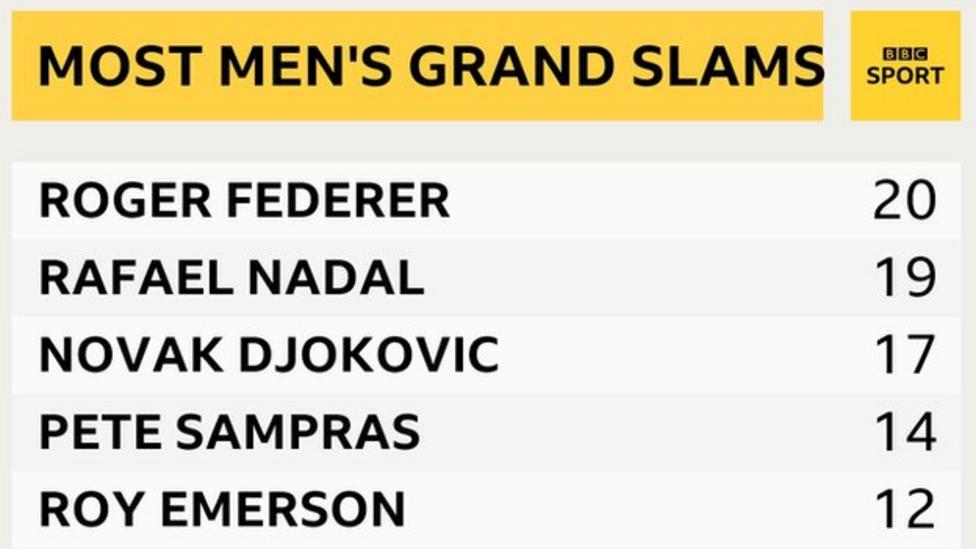 Thiem said it is only going to take “small details” for someone to finally end the dominance of Djokovic, Federer and Nadal.

The old guard have won the past 13 Grand Slam singles titles, with no other player triumphing since Switzerland’s Stan Wawrinka at the 2016 US Open.

Thiem, 26, challenged Nadal in a four-set French Open final before pushing Djokovic even further in his first major final on a hard court.

Russia’s Daniil Medvedev, whom Thiem will replace as the world number four on Monday, also took Nadal to five sets at the US Open in September.

“It’s unique in sports history that the three best players by far are playing in the same era,” Thiem said.

“That’s what makes it very, very difficult for other players to break through.

“You have to beat at least two of them to win a big title. Almost all players failed to do that. That’s what makes it so tough.”

Thiem led Djokovic by two sets to one and missed a break point for a 2-1 lead in the fourth set.

That proved pivotal as a resurgent Djokovic fought back to win in three hours 59 minutes.

“It could have gone either way for Daniil in the US Open and for me here,” Thiem said.

“There’s nothing special to say about it. It takes nothing more than just little bit luck, little details there.” 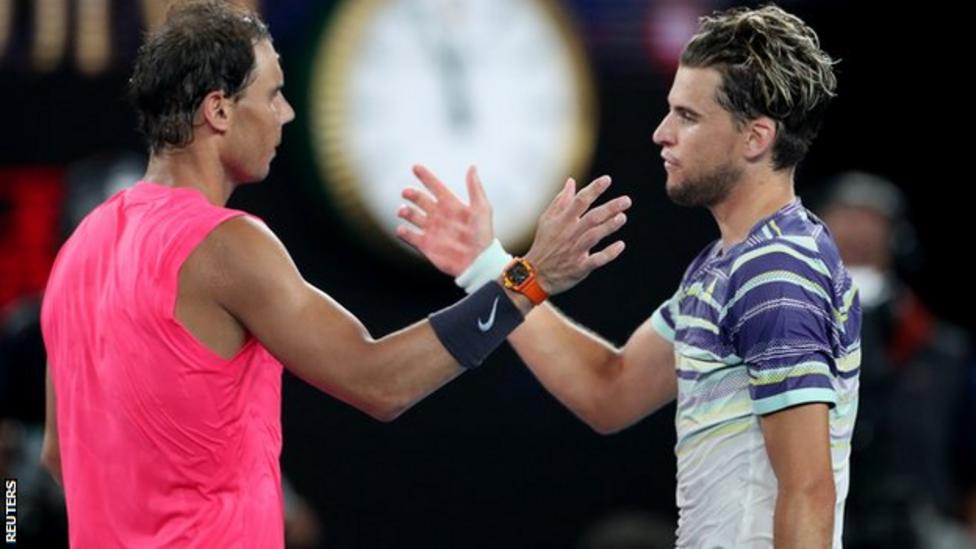 Thiem (R) has twice lost to Nadal in the French Open final, but beat him in this year’s Australian Open

Despite another disappointing loss at a Grand Slam final, it would be a major surprise if Thiem does not clinch that elusive major trophy sooner rather later.

Cash said there is a “great possibility” Thiem could do it at the next attempt, on his favoured clay surface at the French Open in June.

Thiem has lost both of the past two finals to 33-year-old Nadal, who has won a record 12 titles in Paris.

“He is the obvious heir apparent to Rafa at Roland Garros. He’s the only one who looks like he is able to stop him,” said Cash, who lost the 1987 Australian Open final before winning his one and only major at Wimbledon later that year.

“I don’t think he is far from knocking off Rafa over five on [Court Philippe] Chatrier, which is Rafa’s home.

“No-one will beat Nadal there when he is in his top form but he’s not always going to be in top form.”