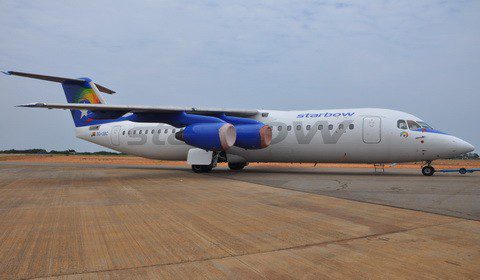 Starbow has announced its first international route, Monday with an Accra-Cotonou flight on August 13, 2012.

In a statement, the company said it is the first to expand into the fast growing West African region.

“Starbow will commence Cotonou services with five flights per week but expects that the service will increase to daily within weeks of commencement. The non-stop flights will take 45 minutes only, thus shrinking the travel time dramatically,” the statement said.

“Currently, the primary alternative to air travel on Starbow is by road from Accra to Cotonou, two cities which are 350 km apart, but traveling this route by road is often time-consuming, taking up to 8 hours due to two border crossings and poor road conditions in certain areas.”

“Starbow’s one-way fares will be significantly cheaper than those offered by its competitors whose flights involve a layover in Lome.”

Dr. Friesen also revealed that, Starbow will continue adding non-stop flights to its network to other West African cities.

“Starbow plans to launch 5 flights per week to Abidjan on September 3rd. Monrovia and Ougadougou are also among the cities that will see frequent Starbow flights in the coming weeks and months.”

Starbow has tripled the size of the domestic market in Ghana with its first two aircraft and expects to replicate this success with regional services using the expanded fleet.