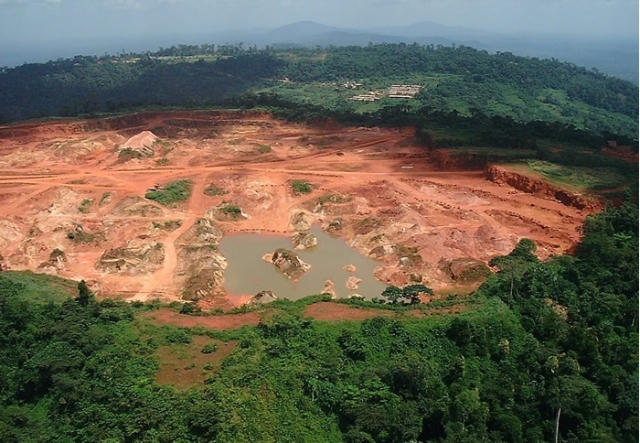 The Coalition of NGOs Against Mining Atewa (CONAMA) is alleging that the Ghana Integrated Aluminium Development Corporation (GIADEC) is deliberately misinforming the Ghanaian public about the bauxite development agenda.

GIADEC recently held a media engagement on the latest developments in the sector, but CONAMA is alleging that some key points in GIADEC’s statement do not reflect the reality.

A Statement by CONAMA signed by Mr Daryl Bosu, and copied to the media said the figures given by GIADEC that Ghana’s bauxite reserves estimated at 920 million tonnes are well-known and faulted the Corporation for not providing actual figures on the quantity of bauxite available for mining.

The CONAMA statement revealed that some of this bauxite was in the forest reserves legally protected from mining and that even if the law permits it, we must question, “whether it is wise to mine the forests due to the extensive damage that would be caused to watersheds, ecosystem services, wildlife and natural resources exceeding any benefits gained for Ghana’s development.”

But the Coalition noted that this strategy should have been drawn up and shared long ago, based on the ‘Free, Prior and Informed Consent (FPIC) principles that are already available for GIADEC to draw on, adding that the non-existence if the stakeholder strategy is undermining the rights of local communities to FPIC.

It said this strategy must be shared with all affected communities, civil society groups and other stakeholders for evaluation and to ensure they are included in this process.

“Transparency so far over the bauxite deal has been woefully inadequate, as identified by the Risk Consultancy EXX Africa in their 2019 report, meaning stakeholders have been unable to assess the deal or the benefits that government keeps promising,” the CONAMA statement added.

The statement by the NOGs further alleged that GIADEC in their briefing stated its commitment to protecting vegetation, water bodies and wildlife in any forest reserve where mining will be undertaken and gave some examples to support their claim that bauxite has been mined in a sustainable manner in the Jarrah Forest, Western Australia.

The CONAMA statement again refuted this saying, ‘Jarrah Forest is a simple forest system with much less human pressure and has a potential for reforestation, a point we have made before, but the Atewa Forest, by contrast, is a highly biodiverse complex tropical forest which will not be possible to return it to its pre-mined state of high biodiversity.”

GIADEC also stated that ‘strip-mining’ will be used as a ‘best practice’ instead of ‘open-pit mining’ to ‘reduce noise, dust and the mining footprint’, but the Coalition, however, stated that it is not a choice, saying, Strip Mining is the only technique available for mining Ghana’s bauxite because it lies in flat layers close to the surface and cannot be accessed by any other mining techniques, the statement said.

It also added that Strip Mining removes the forest and all vegetation over a very wide area, ‘but not all at the same time, so the mining footprint will still be very large’.

The statement mentioned the removal and preservation of topsoil to preserve flora and fauna for later reforestation as another technique GIADEC says it will make sure it used, but the Coalition challenges that it is not that simple, saying, removing and returning the topsoil will never preserve the vegetation and other wildlife that it there at present.

“It is as if GIADEC believes the forest can be rolled off like a carpet and rolled back again when the mining has finished.

“Putting the topsoil back may provide a slightly less difficult substance for plants and trees to grow back again than if there was no topsoil, but tropical plants are very selective and many have difficulty growing back. Reaching the same level of biodiversity after mining will be completely impossible in a highly biodiverse forest such as Atewa,” it added.

The statement again mentioned GIADEC in their briefing saying that it will restrict mining near water bodies, but CONAMA again says it will not be possible to mine Atewa Forest without affecting the critical water sources, the three major rivers that rise in the Forest that together provide water for local communities and around 5 million Ghanaians living in Greater Accra.

It said about six tributaries of the River Birim already have been identified to fall directly within the proposed safe areas designated for drilling, which is the north of Atewa Forest Reserve and, even if mining is kept away from the rivers’ headwaters, as GIADEC intends, the mining will cause heavy metals to leach from the disturbed soils and be washed into the water sources, polluting them with dangerous heavy metals.

The statement said, the outstanding made by GIADEC in their briefing was the mining licence will cover the only 90m2 of the total 725m2 of Atewa Forest and CONAMA says that this would make Atewa Forest just over one-tenth the size of an average-sized football pitch while the area to be mined would be a small fraction, perhaps just the penalty area.

“We are wondering if this is an attempt by GIADEC to pull the wool over people’s eyes or a genuinely confused mistake? We also question the huge number of jobs promised by GIADEC for the sector, estimated to be 10,000 direct and 25,000 indirect jobs, but we really wonder where all these jobs will be.

“One of the world giants of the bauxite and aluminium sector – Alcoa – has bauxite mines and alumina refineries and smelters in 15 countries across the world yet employs only 14,000 people. To help Ghanaians make a properly informed decision about bauxite development, it would be really helpful if GIADEC can give a breakdown of specifically where all these jobs can be created and how long the employment is likely to last,” the statement said.

It said the quality of the jobs and the salary that workers can expect is also an issue, especially following the recent unrest at Awaso bauxite mine due to low pay and poor working conditions.

The statement said: “Also important are the jobs that will be lost if the forest is destroyed – jobs in farming and cocoa production for example, as well as the green development initiatives  located there and provide jobs in tourism and local produce processing.”

It said these would be valuable missed opportunities, “For the umpteenth time, the government needs to know that there is no contention with the fact that the Sinohydro deal will present positive economic prospects for Ghana.”

“What is clear so far is that the associated social and environmental trade-off analysis with respect to the targeted locations for this deal is poor and not green, and threatens Ghana’s watersheds, impact negatively on the integrity of a globally significant biodiversity areas, as well as contribute to emissions and destroy an important natural climate solution for Ghana,” the statement said.

The Coalition in the statement reiterates its demand that Atewa Forest – a site of high biodiversity value and protector of the watersheds for three rivers serving clean water to 5 million Ghanaians – must as a matter of urgency be removed from the planned bauxite development.

“GIADEC’s promises are empty. Atewa Forest cannot be mined for bauxite in a way that will not destroy the forest and its services provision as we know them today. The government must rescind this decision and remove Atewa Forest from the bauxite deal immediately.”