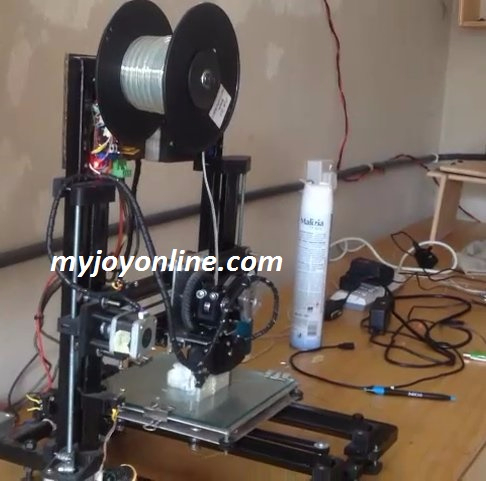 A group of university students in Ghana have built a machine for printing items in three-dimension.

It took two weeks for the five inventors, aged between 21 and 25, to build the device from electronic waste and environmentally-friendly local materials.

The group was motivated by repeated calls by experts for investment in such innovation as key to transforming Ghana’s economy.

They are Kobina Abakah-Paintsil, Emmanuel Kweku Mensah and Loic Avegnon – all from UMAT and their KNUST counterparts Ama Agyapongmaa Amponsah and Isaac Nyankum.

Leader of the group is Kobina Abakah-Paintsil. He has been sharing how the group started work.

“We had a problem with packaging, since we also like practical things we got fed up from always having to imagine things our lecturers have been saying and teaching,” he explained.

He continued “3D printing was an avenue for us to explore in the sense that we could actually make whatever we needed in the physical realm for us to see.”

Isaac Nyankum, another group member, expressed worry at the rate of visiting factories for easy and customised educational materials.

The initiative promises to stop what has become the norm to go to industry to make something small at a very high cost which actually could just be printed, using the normal ink-jet printer.

Unlike existing 3D printers on the market, this one is made from local materials and electronic waste.

The screws, rots, square-pipes, motors from spoilt printers and photocopiers, bike tubes as well as land cables, are some of the materials collected from ‘Agblogbloshie’ and other big markets around.

With the exception of the electronics which are not made in Ghana, basically everything is locally sourced including the e-waste.

“What we considered was the fact that we have so much e-waste around. There is the potential of making new things out of what people have discarded as waste. So we take advantage of that.”

Going this way means it reduces the cost of the printer drastically rather than having to import everything. “It is a little bit cost effective”, Kobina added.

According to Kobina Abakah-Painstil, the team’s goal is to see the printers used to enhance teaching and learning in basic schools.

The design is an open source design. The young innovators used two weeks to improve upon it.

The team project in 5 to 10 years time that these printers will be used in every single basic school, JHS and SHS to enhance the teaching and learning experience.

Kumasi-based incubation hub, Kumasi Hive, which encourages innovators of all types, has stepped in to support the group.

“We need to give business support to engineering and hardware companies especially on systematisation”.

KLAKS 3D does have the potential to be scaled up. The fact that it uses e-waste, it means they must secure a supply chain of components that are being recycled.

It has already sold one of the printers to a non-governmental organisation, and the team reports high demand for it.