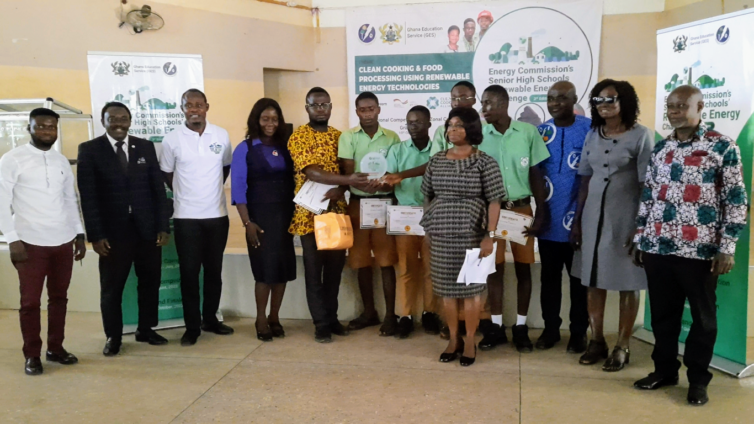 Sumaman Senior High School in the Jaman North District stood tall among its peers in the Bono Region’s Renewable Energy Challenge to win the ultimate prize.

They won the 2022 regional challenge involving seven other schools with their innovation called “Solar Food Dehydrator”.

This year’s challenge, organized by the Energy Commission, is under the theme: Clean cooking and food processing using renewable energy technologies.

The judges looked out for innovative and environmentally friendly projects, economically viable projects, and presentation skills.

Sumaman SHS thus qualifies for the zonal competitions with a chance of making it to the grand finale in October.

According to the lead presenter of Sumaman SHS, Francis Agyapong Jnr, their innovation is aimed at addressing the problem of tomato spoilage.

He said with over 300,000 tons of tomatoes produced, mostly in the rural areas, there is a lack of appropriate and hygienic means of preservation.

“So we built the solar food dehydrator -capable of dehydrating the tomatoes and still keeping them nutritious, to help address the challenge”, he explained.

He explained further that the materials used are affordable and easy to make.

“We used malt tins to construct a solar panel-like structure to attract the sun, and it can easily be built and used on a large scale”, he said and added that they would improve it ahead of the zonal competitions with the hope of making it useful to the society.

The Senior Manager at the Energy Commission and the program coordinator for the challenge, Julius Nkansah-Nyarko, said the objective is to encourage and assist young students to come out with innovative products and projects to transform the cooking and food processing industry in Ghana.

“We are looking at projects that would shift us from the traditional ways of cooking into the use of improved cookstoves and efficient fuels to help attain the clean cooking objectives”, he explained.

He said the best projects from all the 16 regions would compete in two zones, with the best three in each zone, moving to the finals on October 19, 2022.

“The best six projects would further be developed by the Energy Commission, CSIR, and other partners with plans to commercialize them. We do not want the innovations to remain on the table, we will place value on them, and if possible, these students could be earning money from the projects that other research bodies would be helping us develop and improve. We are also talking to the clean cooking alliance, a body under the United Nations Foundation for the promotion of clean cooking in the world to help us achieve our aim.”

Prof Nana Sarfo Agyemang Derkyi, a lecturer at the University of Energy and Natural Resources and one of the judges at the Bono Region Challenge, appealed to the government to extend the required support to ensure that the innovations are improved so that society could get something meaningful from them.

“If an idea comes, we need real financial and policy support from the government. If the government encourages innovators and assures them of buyers, then that is the way of commercialization. I believe with such commitment and the support of other stakeholders, we would be amazed at what would come out of the projects”, he said.

He said it is important to whip the appetite of the students so that they can come out with more innovations.

Each student received a certificate, an amount of money, and other valuable items. Dormaa SHS was named the best team in presentation and coordination. They took home souvenirs and cash prizes.

DISCLAIMER: The Views, Comments, Opinions, Contributions and Statements made by Readers and Contributors on this platform do not necessarily represent the views or policy of Multimedia Group Limited.
Tags:
Bono Region
Sumaman SHS