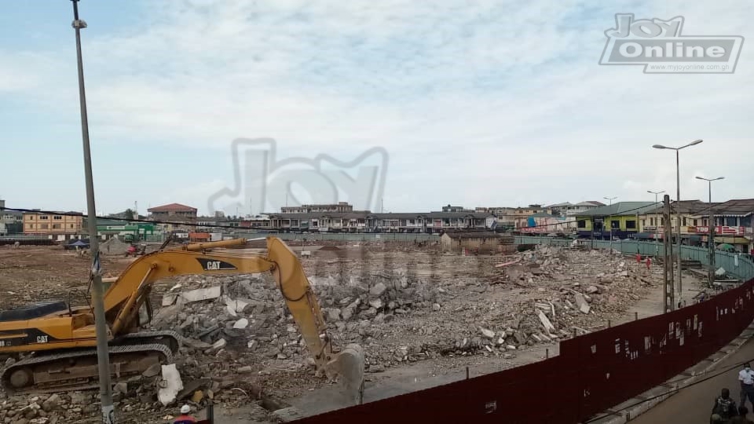 Contractors working on the redevelopment of the central business district of Takoradi popularly Known as Market Circle has pulled down the structures after a month of relocating the traders to begin their work.

The over 93-year-old Market served people within Sekondi-Takoradi and the Western region at large for brisk trading and other commercial activities.

The redevelopment of the market according to city authorities became necessary after several complaints from traders, shoppers, and people who lived around the market on how the market was becoming weak on daily basis.

Again city authorities said the market has not undergone any refurbishment since its construction in 19 hence the urgent need for redevelopment.

The new Takoradi Market Circle yet to be completed would reduce traffic congestion in the surrounding areas of the market by providing on-site bulk breaking facilities to take such activities off the main Market Circle Road, the president said.

The redevelopment is expected to also increase trading, the number of rentable shops in the city and reduce the number of vehicular and human points of conflict and congestion around the central business district of the metropolis.

Sekondi-Takoradi Metropolitan Assembly handed over the market Circle to the Messrs Contracta Costruzioni Italia SLR in May 2021, after relocating the traders to a temporal marketplace.

DISCLAIMER: The Views, Comments, Opinions, Contributions and Statements made by Readers and Contributors on this platform do not necessarily represent the views or policy of Multimedia Group Limited.
Tags:
President Akufo-Addo
Secondi-Takoradi
Takoradi Market circle
Traders