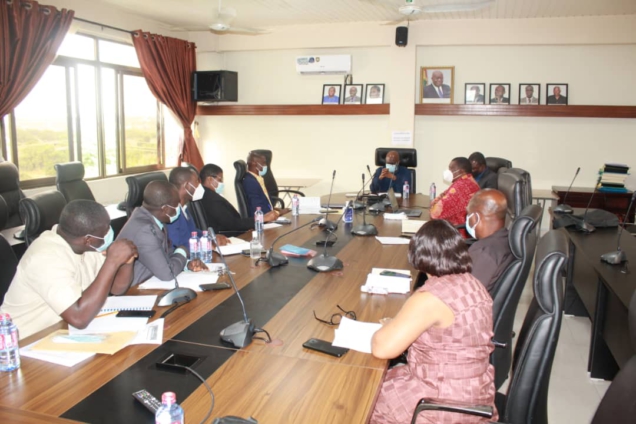 The Technical Universities’ Senior Administrators Association of Ghana (TUSAAG) has met with the Director-General of the Ghana Tertiary Education Commission (GTEC), Prof. Mohammed Salifu over a number of issues.

The TUSAAG President, Edem Honu raised concerns about the non-existence of conditions of service since their conversion from polytechnics to technical universities and inconsistencies in their scheme of service as compared to that of their colleagues in the public universities.

In his response, Prof Salifu stated that there was no single document for conditions of service for all public universities since the central government is responsible for some aspects while others were taken care of by the individual institutions internally generated fund.

He also indicated that both the technical universities and public universities are on the same market premium as well as book and research allowance.

On the matter of scheme of service, the GTEC D-G said some issues have been flagged for addressing and urged the TUSAAG leadership to bring out the inconstancies for deliberation.

Mr Honu, further highlighted the issue of office holding and the payment of appropriate allowances to those in acting capacity, when qualified people are not in place. T

The Tertiary Education Commission boss responded by asserting that GTEC cannot pry into details of office holding because of the variations in each institution. Consequently, it will deal with the basic functions and in principle had no issues with departmental level appointments.

TUSAAG also sought clarification on why non-teaching staff were not given post retirement contracts like their teaching counterparts and it was explained that this became necessary because of the issue of student staff ratio (SSR) which is a general deficit in teaching, poor research output on the continent and in certain priority areas such as STEM.