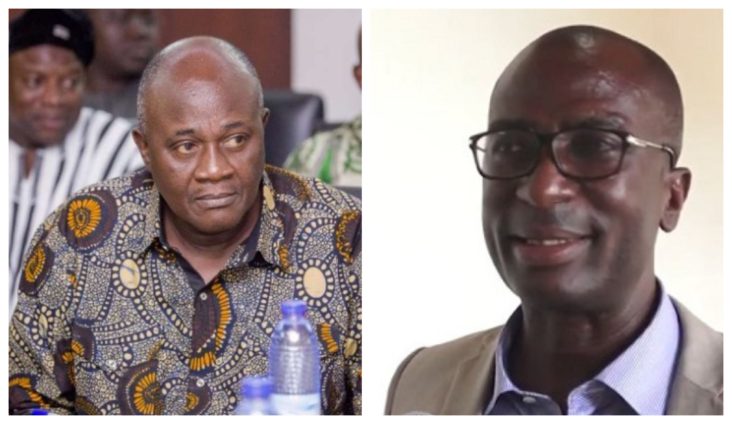 Tensions reached a boiling point in Parliament on Tuesday over the controversy surrounding the election of MMDCEs in the country.

This was after the Juaboso MP, Kwabena Mintah Akandoh had read a statement on the floor demanding action from the house over the way some of the approvals had been carried out amidst allegations of vote-buying among others.

The MP cited the case of the Juaboso district where a presiding member is challenging the approval of the DCE nominee which he alleges was conducted on the blind side of assembly members.

Speaking on the floor of the house, Mr Akandoh in reechoing the sentiments of the Presiding member that the confirmation process is null and void, and urged the House to probe questionable elections of some of the nominees.

“At the core of our democratic practice is elections. An opportunity for opposing elements to register their displeasure with how and by whom they are being governed and any attempt to silence, muzzle, or rid citizens and elected representatives of their rights to oppose decisions made on their behalf have the potential to open the doors of anarchy and lead to open and disastrous revolt. This must, by all means, be prevented.

“Unfortunately, it is not a unique occurrence but seems to have been flawlessly replicated in several districts across the country. The plethora of locations where such horrible examples occurred includes Suaman, Bebiani Ahwiaso, Bekwai, and Sekyere Kumawu.

“As legislators or Members of Parliament, we have through the democratic process emerged as voices for countless thousands. For this reason, we must raise our voices against such acts that have the likelihood of getting us back to the dark ages.

“For this reason, I will like to call on Parliament as a House to constitute a probe into areas where these schemes are reported to have taken place and to propose measures to rectify the situation.

“This is not a course to be left at the doorstep of the Executive or Presidency. This is not an issue that should only be dealt with by the ruling NPP. This is not NPP Ghana or Akufo-Addo’s Ghana. This is our country and we must cure this cancer before it kills us all,” he added.

But Minister for Local Government and Rural Development, Dan Botwe in a sharp rebuttal berated the speaker of parliament for admitting the statement from the Juaboso MP.

Mr Dan Botwe said contrary to information, the President nor is the governing NPP involved in the confirmation of MMDCEs.

“Mr, Speaker how is the ruling NPP involved in the process of confirmation of MMDCE’s for it to appear in such a statement which has been admitted on this floor. This is not NPP’s Ghana or Akufo-Addo’s Ghana, this statement is totally baseless, unwarranted and I am surprised this statement has been admitted on the floor of the republic of Ghana,” he told the Second Deputy Speaker of Parliament, Andrew Amoako Asiamah who was in the Speaker’s chair.

The Second Deputy Speaker, however, did not take the comment lightly and asked the Minister to apologize and retract.

After about 10 minutes of banter between the Second Deputy Speaker, some Minority members and the Local Government Minister, Dan Botwe however resolved to retract.

“Mr. Speaker, I said I was surprised the statement has been admitted, I replace I am to say, I am no more surprised. Thank you Mr, Speaker,” he ended.

The Second Deputy Speaker, however, stepped down the statement made by the Juaboso MP and asked the Members to consolidate similar statements for future discussion.

DISCLAIMER: The Views, Comments, Opinions, Contributions and Statements made by Readers and Contributors on this platform do not necessarily represent the views or policy of Multimedia Group Limited.
Tags:
Andrew Asiamah Amoako
Dan Botwe
Local Government Ministry
MMDCEs