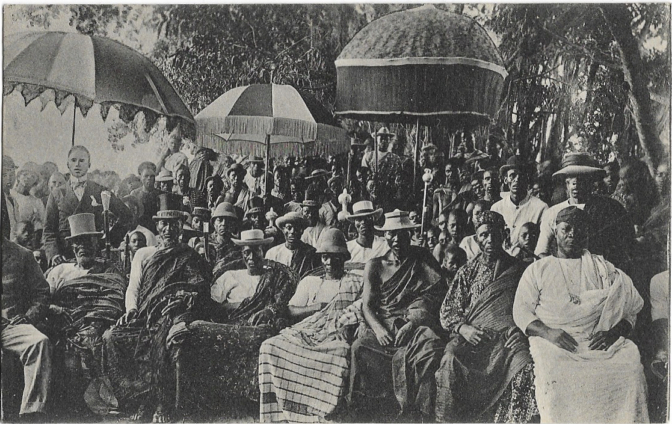 The Anlɔ State armed forces consisted of the entire effective male population and an elite female brigade. Anlɔ warriors were valiant and renowned for fearlessness. They triumphed, against all odds, over endless incidences of external aggression. It was the dream of every Anlɔ citizen to die in active service to the fatherland rather than perish by natural causes. Death on the battlefield was regarded as the most honourable civic achievement. In fact, by custom, Anlɔ Warrior-Kings were installed on the battlefield.

This allowed the Awɔmefiã, as the Anlɔ King of Kings, or Supreme Head of State, to call upon them conveniently. The war throne, arsenal and food supplies were kept in Atsifoame, where the Aʋadada traditionally resided with a Council of Military Intelligence, known as the Aʋadzikpɔlawo. Atsifoame also served as a reservist war camp which provided reinforcement and ammunition for all the three wings.

In the event of war, the caution signal was by a distribution of corn seeds, through the Major General, to all brigades. The number of corn seeds allocated to a brigade indicated the preparation time and specific day for attack. Everyday each Major General put by a corn seed and on the final day, with only one seed left, the respective brigade proceeded to war.

It was tradition for the Woe division to fire the first bullet, followed by the Lashibi or Aklɔbɔwo division, and finally the Adɔtri, from the advantaged central position they occupied, would attack the enemy to mark the commencement of war.

Military strategy and tactics were strictly concealed Anlɔ State secrets. The Agave-clan of Anlɔ were exclusively entrusted with the sacred mysteries of the Anlɔ State military. A series of sophisticated rituals and ceremonies were held at divine shrines, under the auspices of the Togbi Nyigbla and Aʋadada, that purified and made all warriors invincible to guns, swords, spears and arrows. This string of rituals was also a technique to sieve out soldiers fit for warfare.

King Tɛngɛ Dzokoto II served as Dufia, or City Ruler, of Anyako and Miafiagã of the Anlɔ State from 1873 to 1911, after he succeeded General Tɛngɛ Dzokoto I, his father, who previously served in the same capacity from 1825-1866.

General Dzokoto I notably led the successful Datsutagba war effort and siege of the Keta Fort in 1865-1866, for which he was awarded, by the Omanhene of Akwamu, Nana Akoto, a laurel of valour.

King Tɛngɛ Dzokoto II famously “disappeared into thin-air”, and left behind a cloth, after a dastardly assassination attempt by the Kingdom of Great Britain’s armed forces stationed at Keta. The cloth was presented to Queen Victoria as a museum showpiece.

After Alakple, Kodzi, Fiawu and Dudu were burnt to ashes by the British, Miafiagã Tɛngɛ Dzokoto II was forced into exile together with eminent members of the Yeʋe secret society and military personnel. He lived in Ŋɔtsie for almost a decade.

He later voyaged to German-administered Lomé, then referred to as Bey Beach, and petitioned the elders of Avedotui land for territory. He chose a site near Gafe. The elders accepted his request and named King Tɛngɛ Dzokoto II’s settlement ‘Tɛngɛ Kpedzi’ at Gafe to honour him.

King Tɛngɛ Dzokoto II took this as an opportunity to reorganise his military. He posted a regiment, commanded by lieutenant Adabraga Preku, at Tsikalekope, the main entrance of the settlement. Tɛnge settled another regiment at Anyro, commanded by lieutenant Kpogo, to ward off saboteurs from the Adzanju end. He subsequently embarked on visits to Assahoun and Tsevie, where other Anlɔs were domiciled, to develop relations with them. James Ocloo remained behind at Tɛngɛ Kpedzi to deal with any correspondences and other confidential matters at the Anlɔ embassy of King Tɛngɛ Dzokoto II. King Tɛngɛ Dzokoto II also toured Togoland to form a network of aristocrats and merchants.

King Tɛngɛ Dzokoto II was introduced to the German Governor-Resident in Lomé and received the full support and patronage of the German Government. King Tɛngɛ Dzokoto II became pro-German and favoured Otto von Bismarck’s foreign policy of non-interference in Èʋe affairs. Until the Berlin Conference of 1884-85, Bismarck was disinterested in Africa, yet eventually felt it necessary to colonise Togo in response to Great Britain’s scramble for territorial power. Representatives of the German Government, from Lomé, visited the Anlɔ embassy at Tɛngɛ Kpedzi regularly, especially over the weekends.

The British at Keta and Cape Coast heard of the German-backed rearmament programme and political influence of King Tɛngɛ Dzokoto II in Togoland. They regarded this as a direct threat to British control of the Gold Coast and were prepared to ceasefire.

The British lured a few Anlɔ Chiefs with bribes and gifts, and they in turn, provided the colonial office with information about Miafiagã Tɛngɛ Dzokoto II and his Bate clansmen.

William Henry Klutse Kobla Chapman, former District Commissioner of Keta, travelled to Togoland and opened discussions with King Tɛngɛ Dzokoto II. They assured King Tɛngɛ Dzokoto II that the motive behind the ardent request for his presence by the British in Anlɔ was not sinister but complimentary.

When King Tɛngɛ Dzokoto II reached Kedzi, news quickly spread and a mammoth crowd of Anlɔ citizens flocked to welcome the formidable Warrior-King. Tɛngɛ had no choice but to address the commoners.

King Tɛngɛ Dzokoto II was received by a government envoy and temporarily lodged at the Keta Fort. He led a delegation of senior Anlɔ statesmen and boarded the S. S. Adolph Woeman ship from the Keta Beach to Accra.

After the plot failed, King Tɛngɛ Dzokoto II and the Anlɔ leaders were graciously received into the Official Residence at Government House, Osu, Gold Coast. After a few days of relaxation and round-table diplomatic activity, a conference was convened.

King Tɛngɛ Dzokoto II led the Anlɔ-Anglo peace talks. The British regretted and apologised for all the blunders of the past, on both sides, and referred to the past as a trial of strength between two brave belligerent cocks.

They heaped encomiums upon King Tɛngɛ Dzokoto II and professed that he was the greatest Warrior-King they had met among the Anlɔs. King Tɛngɛ Dzokoto II, at the conference, was declared paramount ruler from the Volta estuary down to Ave Afiadenyigba. The British offered to expand the royal palace of King Tɛngɛ Dzokoto II as compensation for the ruins of edifices they had destroyed at Anyako. He was recognised as the Supreme Ruler in Anlɔ, or the Awɔmefiã, with authority to adjudicate in all matters civil and criminal within the State.

King Tɛngɛ Dzokoto II thanked the British Government and replied – “Your hospitality to me and my team has been wonderful. I am deeply grateful for your fund of goodwill and for your recognition of me as paramount ruler of the Anlɔs”. The Awɔmefiã-elect discussed and agreed to the peace terms.

After 21 days at the Castle, the British Governor ordered that 50 soldiers and bearers escorted King Tɛngɛ Dzokoto II and the Anlɔ deputation back to Anyako, Anlɔ State. King Tɛngɛ Dzokoto II was carried in a palanquin all the way by the beach through Anlɔga to Anyako. The Awɔmefiã’s delegation was seen off with 21 Kegs of gunpowder, 21 cases of stork gin and 21 rifles. The journey took 7 days.

When the delegation reached Anlɔga, a great durbar of Royals and commoners, at the insistence of the British Government, was held. The peace terms were then read over to Anlɔs. Cannons and artillery were fired to salute and celebrate the heroic return of King Tɛngɛ Dzokoto II. The British presented King Tɛngɛ Dzokoto II to Anlɔ State and recognised him as the supreme traditional ruler.

He thenceforth continued, along with the convoy, the trip back home to Anyako. King Tɛngɛ Dzokoto II gave a display of supernatural powers as he crossed the lagoon. The convoy successfully entered Anyako and slumbered at the grand three-storey palace of the King; this bastion of governance functioned as a permanent residence, courthouse and guesthouse. The next morning, after a delightful banquet, he bade them farewell. King Tɛngɛ Dzokoto II was a legendary military genius and a mesmeric royal.

The author, Vincent Djokoto, is a Business Executive and Columnist.