The women of Tano, Making a life out of palm oil 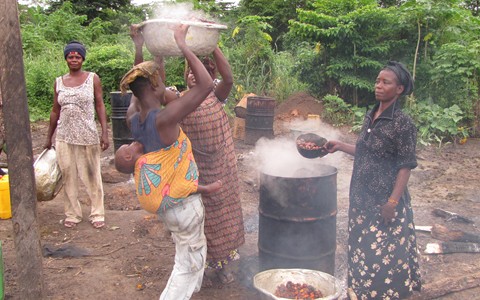 Afia Konadu is a 19-year-old teenage mother who has been living in the Tano South village of Biokrom all her life. She dropped out of school at age 17 when she had a baby she had not planned for. The man she claims to have fathered the child denied ever having anything to do with the pregnancy.

Today, she plies a trade in palm oil processing in her little village. She carries water, plucks palm fruits and carries finished oil products to Bechem, the district capital for onward transportation to other parts of the country. As I met her, the baby cries endlessly clad in tattered clothes as she pays little attention to him but continues with her work.

This palm oil business is what has sustained herself and little Maabena as her daughter is called, since everybody in her family gave up her after getting pregnant in school. The journey has been bitter-sweet so far.

Afia is just one of the many women in the area surviving on cash from palm oil. Most of the women here buy the palm fruits from small holder farmers, assist in its plucking and carry water to the numerous processing facilities dotted in virtually all villages of the Tano Districts (North and South).

“It’s a big business, and our lives depend on it” Afia said.

The women face serious challenges here; major setbacks as poor road network to the villages that supply the fruits, inadequate water supply and high cost of electricity among others is denying many of their deserved revenues.

“The business is a good one for us here. On a good day, I can make up to GH 10 Cedis which I use in supporting my sick parents and to cater for my little baby. But it’s not always easy; we don’t have water at the processing machine and we have to walk to the closest borehole which is about 2000 meters away from here with my baby at my back in the scorching sun. Sometimes when the borehole doesn’t work, we don’t do anything and we lose our daily income” Afia told me.

The palm oil boom is not seen only among the women of Tano. At the Biokrom processing point where I was alone, the women produce fifty fifteen of palm oil daily but they have the capacity to do twice that figure if well equipped.

Currently, government spends USD 100 million annually to import palm oil to make up for the 35,000 metric tonnes deficit whiles six out the country’s ten regions (Western, Central, Brong Ahafo, Ashanti, Volta and Eastern) have a largely untapped conditions that support production, according to a Business and Financial Times July, 2012 report.

In the Tano South district alone, the Business Advisory Committee (BAC) which is the government’s supervisory body for such Small and Medium Scale Enterprises has recorded over 700 women engaged in traditional palm oil processing. Such women, the likes of Afia, use pistol and mortar to pound boiled fruits and use crude manual processes in extracting the oil.

“They love doing it that way. You know women and how they like to sit together and gossip and make use of cheap labor,” says the local Coordinator for the BAC, Zakaria Abdul-Mutalib.
I caught up with him at the District Assembly office in Bechem on his way to meet District Chief Executive (DCE) for the area, Bukari Anaba Zakari to discuss a similar subject.

He told me the industry could be an engine for economic development of the area and indeed the country at large looking at the potential. “This industry is a women affair; it could be a multi-million cedi one if the needed investment is made. These are the activities that directly touch the lives of our people and once our women are financially empowered, the family is and society is transformed as such”.

He says it is difficult to get the women to adopt new and improved means of processing because they are attached to the crude methods but if the government was keen on making an impact, there had to be a concrete policy direction.

“What we are trying to do is to show them how big the small business they own here can be,” he said. BAC has facilitated the acquisition of loans for business expansion and begun the process of registering the women under the informal sector module of the Social Security and National Insurance Trust.

“What I think needs to be done urgently is to pump in more money strategically into training and capital expansion for the women to be able to market the products to the ready market that already exists. When they are financially empowered, they can then develop their own skills and that of their children,” he said.

Thirty-two year old Salamatu Haruna also works at the same processing point as Afia. For fifteen years, she’s been in the palm oil processing business and has seen all her four children through to senior high school level with income from the trade.

She buys palm fruits from Kwasu, Nyensua, Old Bosankro and Ohianiguasi all farming communities in the district to be processed at Biokrom. Salamatu told me the deplorable nature of the roads linking some of these communities to Bechem, the District capital and Biokrom takes a negative toll on her work.

“Our roads are very bad especially during these rainy times. Sometimes, before we get a car to cart the palm fruits to the processing center, our products would have started going bad and even when we do, the drivers charge exorbitant fares. This takes a lot of our money. As I speak with you, I have 500 Cedis worth of palm fruit in Bechem-Kwasu which is deteriorating because no car is willing to go for it. The road is unmotorable now” she said.

And her story summarizes the plea of Abdul-Mutalib, our BAC pal; “Whenever we talk to them, they ask for loans, they ask for a reduced cost of electricity tariffs, they ask for improved feeder roads to help them work. They are waiting on us, we dare not fail” he posits.

Once upon a time, Ghana’s West African neighbor produced 40 % of the world’s total oil palm output. At the time of the country’s independence from British colonial rule in 1960, it contributed 82% of national export revenue. By the mid 90s, the Nigerian palm oil harvest had dwindled to just 7% of global production.
More embarrassingly, the once largest exporter had turned into a net importer of palm oil, sourcing 180,000 metric tonnes of the commodity from international markets to meet local demand.

What went wrong? An April, 2012 report of the Vanguard newspaper (one of Nigeria’s authoritative media) attributed the situation it describes “as one of the most miserably failed economic opportunities in Africa” to poor government policy on the commodity, diverted attention to the oil boom of the mid-seventies and the subsequent decline of farming.

Today, Ghana has oil and our traditional export products like cocoa and gold are doing well on the international market; the temptation to ignore such lesser known sectors as palm oil has never been any stronger.

“With palm oil, we would make it”

Afia may have failed acquiring formal education, but she tells me that is not the end of the road. “I want to learn a trade in hairdressing and for now, I am saving some of my money to pay for my apprenticeship fee. With palm oil, we would make it even though we did not go to school” she says.

In the instance that our palm oil business receives the same hype that the less than two year old crude oil industry, for example, is getting, not only Afia and the women of Tano would benefit; we have a huge West African regional market which currently hovers between 850,000 and 1,000,000 metric tones.

A multi-billion industry is waiting to be created.