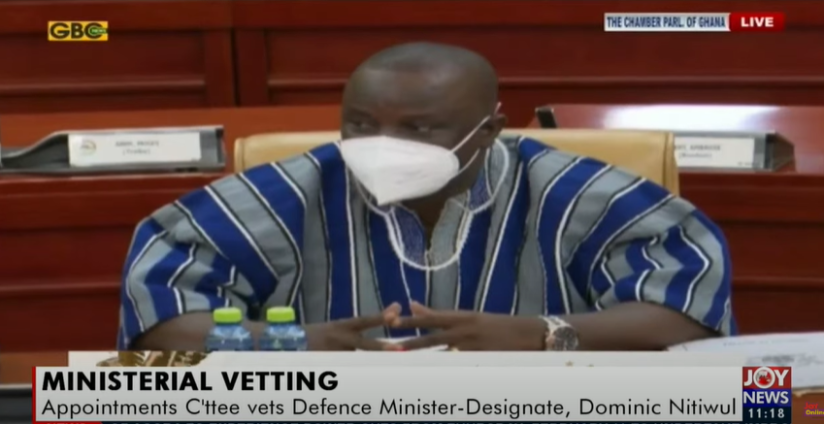 Speaking at Parliament’s Appointment Committee vetting Thursday, he stated that the Armed Forces has rigorous steps and tests for prospective recruits will have to go through before they are qualified to join the army.

He explained that no one can influence these tests or their results to favour any recruit.

“Especially for cadets you need to go through six different stages, none of them you can influence, including writing an exam at the University of Ghana.

“For recruitment, it’s the same thing. There are selectors who go around the region to select people…you can’t influence them,” Mr Nitiwul said.

The Minister-designate said he knows about the perception that recruiting people in the army based on protocols have existed in the minds of Ghanaians for a long time.

However, “it is not a true story and I can assure you that it is not possible but all,” he added.

Mr Nitiwul mentioned the army uses The Ghanaian Times, Daily Graphic newspapers and the official site of the Ghana Armed Forces to announce their intentions when recruiting.

He stated that if prospective recruits do not see these advertisements but are informed by other people about new enlistment via protocol, they are targets of fraud.

“Ghana Armed Forces do not ask you to pay money to get recruited. There’s no protocol in the Armed Forces. So anybody who says there is a protocol recruitment, straight away you should know the person is trying to defraud you,” he said.

Meanwhile, the Armed Forces has arrested several people extorting money from Ghanaians while posing as recruiters.

The Bimbilla MP revealed that many of them have been handed over to the police.

He added, “several of them got prosecuted, others are facing the law court and some are in jail.”

DISCLAIMER: The Views, Comments, Opinions, Contributions and Statements made by Readers and Contributors on this platform do not necessarily represent the views or policy of Multimedia Group Limited.
Tags:
Appointments Committee
Dominic Nitiwul
Ghana Armed Forces
Minister for Defence