They called us donkeys, monkeys; treated us like animals in Lebanon – Returnee migrant laments 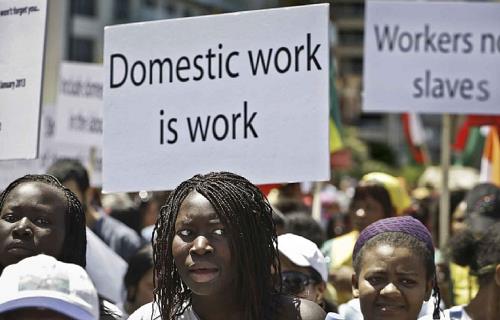 A one-time Ghanaian migrant to Lebanon, Dinah Haizel, has spoken up about the ill-treatment she endured at the hands of various employers as well as the agents, in Lebanon, who physically abused her.

The abuse she suffered for the year-and-a-half she spent in Lebanon was not just physical but also verbal and emotional.

26-year-old Dinah left the shores of Ghana in 2019 in search of what she felt would be greener pastures. Her ultimate goal was to secure enough money to fund her education at the tertiary level.

Introduced by a friend to an agent who convinced her there were work opportunities that paid well in Lebanon, she decided to try her luck.

Dinah had originally wanted to travel to Turkey or Germany but, owing to her inability to raise the requisite funds, she had to settle for Lebanon.

It was upon arrival in Lebanon that Dinah’s nightmare began. From being overworked to the point where she was getting very little sleep, constantly feeling dizzy and experiencing severe headaches to being physically abused, Dinah began to see beyond the fanciful ideas she had had before her voyage.

Dinah, eventually, in a bid to escape being ‘lynched’ by the last family with which she worked, jumped from the second storey of the apartment block in which she was working.

The left side of Dinah’s body was left paralysed. After months of suffering, she was finally dumped by her employers at the Ghanaian Embassy in Lebanon.

She was finally rescued and brought to Ghana, with the aid of the Ghanaian Mission there, together with some 2,261 others, in August 2019.

Dinah has been traumatised and is still suffering the health effects of her crash-landing.

DISCLAIMER: The Views, Comments, Opinions, Contributions and Statements made by Readers and Contributors on this platform do not necessarily represent the views or policy of Multimedia Group Limited.
Tags:
Dinah Haizel
Ghanaians
Lebanon
Maltreatment
Migrants