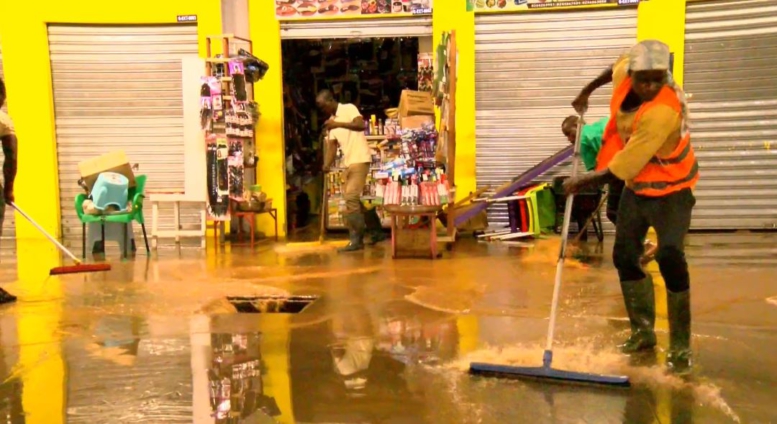 Traders are blaming city authorities and construction firm, Contracta, for the flooding of the Kejetia Market, leading to the destruction of goods.

Two days of downpour on Wednesday and Thursday flooded the Market floor, affecting over 500 stores.

Some trade unions at the market blame the Brazilian construction firm ‘Contracta’ for shoddy work.

Thursday’s rains left many traders and residents devastated. Roof leakages at the new Kejetia Market was an eyesore.

“City authorities must ensure issues of such nature do not occur at the ongoing central market facility when completed”, Michael Kwabena Fosu and Patricia Acheampong, disappointed leaders of the traders, blame construction firm ‘Contracta’ for shoddy work.

Consultant to the multinational firm Contracta Uk limited Emmanuel Danso considers the flooding to be a widespread disaster, not peculiar to Kejetia Market.

He says the drainage system connecting Race-course to Zoo and other areas round the market were choked.

According to him, their men are always on standby at the Market for periodic maintenance; therefore, the flooding wasn’t a result of shoddy as claimed by the traders.

“Throwing waste Indiscriminately was a major factor of the flooding; traders must learn to manage waste to curb unfortunate incident like this”.

Meanwhile, Chairman of the Kejetia Petty Traders Association has called for the re-engineering of the drainage system.

He also wants authorities to relocate traders unlawfully  plying their wares on pavements around the Kejetia Market.