Traders clear streets for use by Asantehene as ceremonial route - MyJoyOnline.com

Traders clear streets for use by Asantehene as ceremonial route 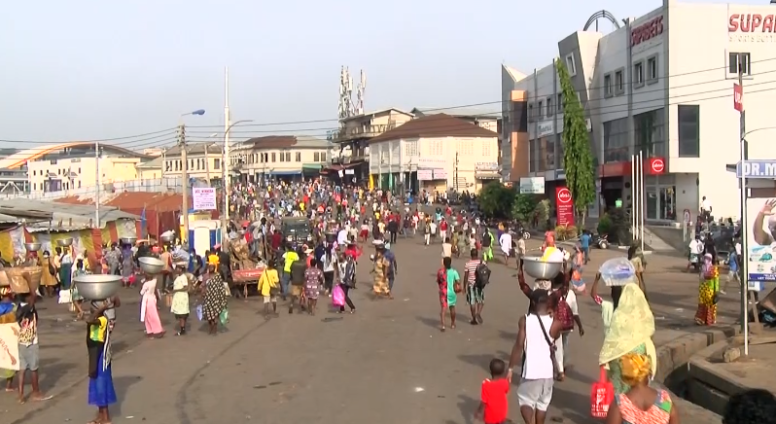 Streets of the ceremonial route of Kumasi were cleared on Wednesday for use by the Asantehene, Otumfuo Osei Tutu II.

The ceremonial route spans from Manhyia, through Dr Mensah to Adum.

Traders returned on Tuesday, a day after the Kumasi Metropolitan Assembly spearheaded a clampdown on trading commercial business on the shoulders of the stretch.

However, the case was slightly different when the convoy of the Ashanti King drove through the principal streets towards the Manhyia Palace.

The pavements which used to be heavy with human and vehicular traffic was less brisk and free-flowing as bystanders waved and cheered at the royal fleet.

Military and police presence was also heavy as part of efforts to decongest the area.

JoyNews’ Nana Yaw Gyimah reported that “the traders are unable to go about with their activities because of the security men.”

Though there seems to be some level of compliance, questions about the sustainability of the eviction remain unanswered.

Some of the traders told JoyNews that the satellite markets stipulated for them will only worsen their plight.

“At Abinchi or Race Course, there is no space for us over there. We know that this road is exclusive to the Asantehene but we have nowhere to go. The authorities must consider us because we have school fees to pay,” one of the traders told JoyNews.

Consequently, the city authorities say they will capitalise on the strides made to get the traders off the ceremonial streets.

Reports say some of the traders returned to the street shortly after the royal convoy passed.

Meanwhile, the Asantehene is likely to use the route occasionally to the custodial house in Adum in the coming days, according to city authorities.