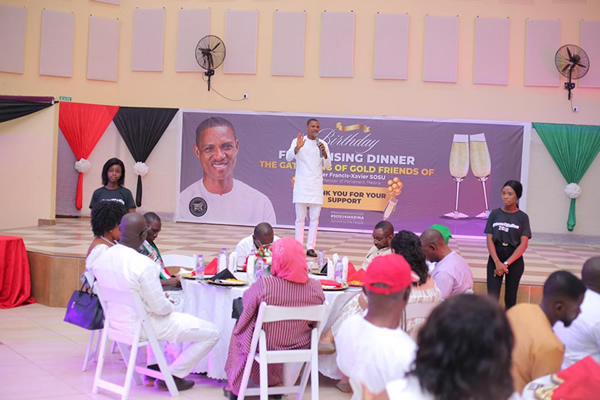 Francis-Xavier Sosu’s bid to become a Parliamentarian for the Madina constituency received a further boost over the weekend, after some traders, commercial drivers and head porters (Kayayei) donated towards the campaign.

The donations were made during the birthday fundraising dinner organised by the office of the human rights and public interest lawyer, to raise funds to support the opposition National Democratic Congress (NDC) for Madina constituency.

The event, which was dubbed “The Gathering of Gold Friends of Lawyer Sosu”, was on the theme, “Rescue Mission 2020: Sosu For Madina – Service To the People”. The event took place on Sunday, February 16, 2020, at the Parish Hall of Queen of Peace Catholic Church, Madina.

It was Chaired by a former Presidential aspirant Sylvester Mensah who is also a former Member of Parliament and a former Chief Executive Officer of National Health Insurance Authority.

Also present at the event was Alhaji Nurudeen, a businessman and a former presidential aspirant. Some sitting Members of Parliament and former ministers of the erstwhile John Mahama administration graced the occasion.

According to a representative of the market women, Madam Esi Ashiagbor, who trades in onions, Mr. Sosu represents hope to the ordinary Ghanaian and they are optimistic his leadership will give them quality representation in Parliament and hope for the future.

The representative of the taxi and ‘tro-tro’ drivers, Kumassah Morris Lodonu intimated that the decision to support Sosu is a result of the many humanitarian activities he continues to engage that benefit the poor and vulnerable. He added that, if such a person is given the opportunity to represent them in Parliament, he will be able to do more. “Lawyer Sosu is our man. He associates with us and we love him,” he added.

The Chairman of the occasion lauded the efforts of all participants especially the market women and taxi drivers who didn’t hold back their little but donated voluntarily to support the campaign.

Others who were present to support were school mates of Mr Sosu as well as members of his family and executives of the NDC in Madina constituency.

The Madina seat is currently being occupied by the governing New Patriotic Party’s (NPP) Abubakar Boniface.