Trucks captured on social media had no explosives onboard - Minerals Commission - MyJoyOnline.com

Trucks captured on social media had no explosives onboard – Minerals Commission 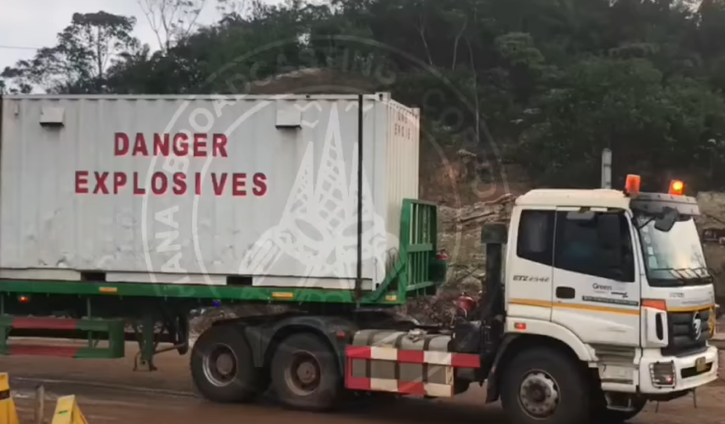 The Minerals Commission has clarified that some two trucks with the inscription “Danger – Explosives” without police escorts did not carry explosives at the time it was captured and the video circulated on social media.

The two trucks in question with registration numbers GT 1821-14 and WR 1301-18, according to the Commission, had already conveyed explosives to Perseus Mining Ghana Limited and were returning to the operational site of Solar Nitro.

In a statement sighted by MyJoyOnline.com, the Commission revealed that on February 16, the Operations Manager of Solar Nitro Ghana Limited (Solar Nitro) notified and requested the approval of the Western Regional Manager of Mines of the Commission to transport explosives from the operation site of Solar Nitro to the mining site of Perseus Mining Ghana Limited (Perseus) in Ayanfuri on February 17.

“A Principal Inspector of Mines from the Takoradi office of the Commission was assigned by the Regional Manager to carry out all the necessary inspections pursuant to the Minerals and Mining (Explosives) Regulations, 2021 (L.I. 2177) and also set in the new safety measures recently issued by the Acting Chief Inspector of Mines/Explosives to all mining, explosives, quarries and other related mining companies,” it added.

On February 17, the Principal Inspector of Mines was at the operational site of Solar Nitro to conduct all the necessary safety inspections and verifications.

After being satisfied that requirements pursuant to L.I. 2177 had been met, he allowed the trucks and the escorts to leave the site of Solar Nitro.

This included but was not limited to the presence of two police escorts, a competent person onboard, the explosives trucks being registered and fit for purpose, the Minerals Commission noted.

“The explosives were delivered to the mine site of Perseus and the trucks returned to the operational site of Solar Nitro without the police escorts and there were no explosives onboard. This was apparently captured and circulated as the trucks that were carrying explosives without escorts.”

In its statement, the Commission indicated that Solar Nitro has been registered as a mine support service company to deal in explosives and has also been issued with all the requisite permits and approvals by the Chief Inspector of Mines/Explosives to transport explosives.

Meanwhile, the Minerals Commission has assured its availability to “provide information on all mining activities or operations in Ghana”.

The Commission has also urged the public to “seek clarification or verify such information with the Commission before they are made public.”

According to the Commission, following the explosion that occurred in Apiatse on January 20, 2022, 14 new safety measures have been introduced to strengthen the existing regulations and protocols for the transportation of explosives and most importantly to protect the health and safety of the public as well as the environment.