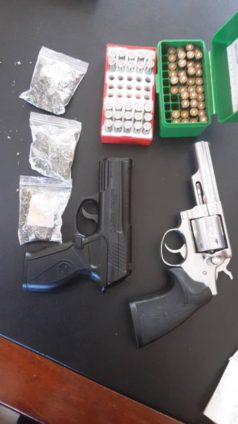 A Police patrol team has intercepted two foreign pistols with 61 rounds of ammunition and two spent shells on an Accra bound vehicle along the Tokor – Accra road in the Ketu South Municipality of the Volta Region.

The guns were found during a routine check operation on an Accra-bound private vehicle and its occupants around 0400 hours GMT, on the 27th of October 2021, following an intelligence gathered.

A press release signed by the Head of the Volta Regional Police Public Affairs Unit, DSP Elizabeth Efia Tenge, indicated that Dominic Bimba, who the guns and ammunition were found on has been arrested by the Denu District Police for possessing firearms without lawful authority.

The suspect who was identified to be a Togolese and a resident of Tokor is currently in custody assisting with investigation.

Upon interrogation, Mr. Bimba revealed that he was transporting the two weapons and ammunitions to someone in the national capital, Accra.

Police has since launched investigations into the incident to identify persons connected to the illegal deal and ensure appropriate sanctions are meted out to them.