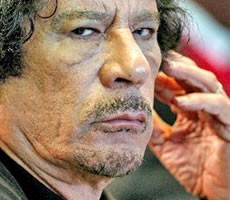 The Tornadoes took off from RAF Marham in Norfolk on a long-range strike mission on Thursday night.

Libyan rebels are also building up their forces on the road to Sirte, sending tanks and rocket launchers.

The UN has already agreed to release $1.5bn (£1bn) in Libyan assets – which had been frozen under sanctions – to help with immediate humanitarian needs.

In a statement, the MoD said “a formation of Tornado GR4s… fired a salvo of Storm Shadow precision-guided missiles against a large headquarters bunker” in Sirte.

The bunker housed a command and control centre. There is no indication that Col Gaddafi was in Sirte or in the bunker itself at the time of the attack.

“It’s not a question of finding Gaddafi, it’s ensuring the regime does not have the capability to continue waging war against its own people,” Defence Secretary Liam Fox told the BBC.

“The attack that we launched on the bunker in Sirte last night was to make sure that there was no alternative command and control should the regime try to leave Tripoli.”

Meanwhile, the rebels are building up their forces around the town of Bin Jawad, preparing for an assault on Sirte, about 100km (60 miles) to the west.

The BBC’s Paul Wood, who is with the rebels, says their mood is still buoyant, despite running into unexpectedly stiff resistance.

Rebel commanders think the fighting on the road to Sirte could last another three or four days, our correspondent says.

The rebel administration, the National Transitional Council (NTC), has begun moving to Tripoli, although many senior figures remain in the eastern stronghold of Benghazi.

Speaking in Istanbul, the head of the rebel government, Mahmoud Jibril, said the uprising could fall apart if funds were not forthcoming quickly.

“The biggest destabilising element would be the failure… to deliver the necessary services and pay the salaries of the people who have not been paid for months,” he said.

In the Libyan capital, Tripoli, there is continued fighting in the Abu Salim district, one of the last areas loyal to Col Gaddafi.