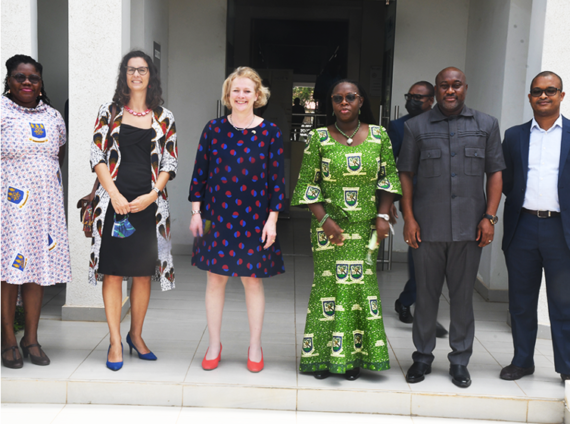 Hon. Vicky Ford in Group photograph with the VC, Pro VC (ASA) and other principal officers of WACCBIP

The United Kingdom Minister for Africa, Latin America and the Caribbean, Vicky Ford has visited the West African Centre for Cell Biology of Infectious Pathogens (WACCBIP) as part of her maiden visit to West Africa.

With her entourage which included Harriet Thompson-UK High Commissioner to Ghana, the Minister was at the Centre to acquaint herself with its activities that have resulted in groundbreaking research outcomes in biomedical science research.

The other members of her delegation were Uzo Gilpin-Health Adviser at the British High Commission and Colin Sykes -Economic and Trade Team Lead.

Welcoming the Minister and her delegation, the Vice-Chancellor of the University of Ghana, Prof. Nana Aba Appiah Amfo indicated that the visit meant a lot to the University and expressed the hope that it was going to be the first of many such visits.

She stated that WACCBIP is one Centre that the University is proud of and holds in high esteem due to the cutting-edge research it continues to conduct in biomedical science.

The Vice-Chancellor also indicated that even though WACCBIP was established with the support of the World Bank, its activities including its research have largely been supported by UK government funding over GBP 3,000,000.

She further stated that it was for this reason that the University, and for that matter, WACCBIP continues to value its UK partners and funders; hence her delight to welcome the Minister and her delegation.

The Hon. Vicky Ford expressed her joy stating that it was, for her, an honour to be at the Centre, indicating her admiration for research scientists and for the fact that they inspire her. She also expressed her belief that the international collaboration by the UK government across the world was phenomenal, given the kind of amazing things that the Centre is doing in biomedical science research. This, she said, could further boost more collaborations with other UK universities and research institutions.

Pro-Vice-Chancellor of the University of Ghana with responsibility for Academic and Student Affairs and Founding Director of WACCBIP, Prof. Gordon Awandare gave a presentation in which he took the Minister and her delegation through the WACCBIP training pipeline. He explained that WACCBIP was essentially set up as a research and capacity-building training centre intended to train and develop new African Science leaders.

Hence, the Centre’s programmes have been designed to target young graduates who are taken through short courses to the master’s, PhD, early Postdoctoral and senior Postdoctoral levels. Prof. Awandare further explained that since 2014, WACCBIP has given fellowships to 313 young African scientists from across the African continent. This, he further explained, comprises 182 master’s fellows, 102 PhD fellows and 29 Postdoctoral fellows.

Highlighting the Centres research scope, Prof. Awandare explained that WACCBIP started as an infectious disease centre but has now broadened that scope to cover a wide range of diseases. This, he said, was made possible through a strategic grant it secured from the Wellcome Trust through the Developing Excellence in Leadership, Training and Science (DELTAS) programme. The DELTAS programme allowed WACCBIP to propose expanding its scope to include human genetics.

He also highlighted a few groundbreaking research that has emerged from the Centre. He mentioned that WACCBIP was the first centre to characterize local infections of dengue fever; carried out the mapping of anti-malaria drug resistance mutations and has made important discoveries in malaria vaccine candidates and many more.

Prof. Awandare also spoke about the key role that WACCBIP played in the wake of the COVID-19 pandemic. He indicated that since the outbreak of the pandemic, WACCBIP has produced the most extensive data on genomic sequencing in West Africa.

He then concluded by enumerating a few challenges confronting the Centre. In particular, he mentioned procurement challenges relating to the procurement of equipment and reagents to conduct research which he said was complex and cumbersome. He also mentioned the high maintenance cost of some of the advanced scientific technology platforms and called for support to build local capacity in this direction.

The Minister and her entourage were later conducted around some of the facilities and research laboratories at the Centre.

Other senior officers of the University who were present to witness the event included Prof. Elvis Tiburu who represented the Provost of the College of Basic and Applied Sciences (CBAS); Professors Mark Yidana and Augustine Ocloo, Deans of the Schools of Physical, Mathematical and Biomedical Sciences respectively; and Faculty and Research Fellows of both WACCBIP and the Department of Biochemistry Cell and Molecular Biology

DISCLAIMER: The Views, Comments, Opinions, Contributions and Statements made by Readers and Contributors on this platform do not necessarily represent the views or policy of Multimedia Group Limited.
Tags:
UK Minister
WACCBIP