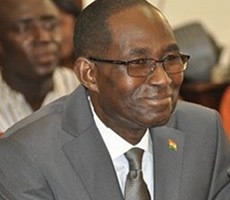 The Ministry of Education has warned that tertiary institutions that do not follow the applicable entry requirements to admit students will have their accreditation revoked.

“All tertiary institutions must be cautioned that severe sanctions, not excluding revocation of accreditation will be invoked against those who willingly breach the regulations,” it said.

Consequently, the ministry has directed the National Accreditation Board (NAB) to publicise, in consonance with the Tertiary Education Accreditation and Establishment Regulations (LI 1984, 2010), the applicable entry requirements to all tertiary education institutions in the country.

A statement signed by the Minister of Education, Mr Lee Ocran, said the ministry had received a number of petitions against the decision of the NAB directing some private university colleges to withdraw identified unqualified students from those institutions.

“The ministry acknowledges the sensitive nature of the issue in view of the need to maintain acceptable standards in order to ensure international recognition and comparability of qualifications granted by the nation’s tertiary education institutions,” it said.

The NAB, in April this year, ordered the Methodist University College, Ghana (MUCG) to withdraw 1,465 unqualified students it admitted to various degree programmes.

The order followed an audit inspection conducted by the board at the university which found out that some of the students who were at various levels were admitted with only proficiency certificates in Computer Studies and other courses.

Others had not obtained grade C6 or less in one, two or all three of the core subjects of Mathematics, English and Integrated Science or Social Studies in the WASSCE.

Earlier in February this year, 695 unqualified students who were admitted by the Central University College (CUC) to pursue various degree programmes were withdrawn.

It said the issue of unqualified students had arisen as a result of errors of omissions and commissions by both the affected university colleges and their respective mentor institutions.

The statement said the university colleges, for reasons which could not exclude monetary purposes, had not bothered to put in adequate mechanism to screen out unqualified candidates, while the mentor institutions had failed to exercise the requisite supervisory role to prevent the unfortunate incident.

“The victims of these acts of omission and commission appear to be the affected students. Three categories of such students have been identified. These are Higher National Diploma (HND) students without the requisite passes in the core SSCE/WASSCE subjects, especially English and Mathematics; Mature students and others with qualifications not recognised for purposes of admission to the nation’s tertiary education system,” it said.

It said the ministry as the final appellant body for all decisions taken in the country’s education sector had, in consultation with the NAB and National Council for Tertiary Education directed that affected university colleges to keep affected HND students for a period, not exceeding one academic year while ensuring that such students took steps to make good the defects in their grades in the SSCE/WASSCE core subjects before they graduate.

“The validity of this decision is also for a period not exceeding one academic year with effect from the 2012/2013 academic year,” it said.

On other unqualified students, the statement said, those affected university colleges who had admitted such students should organise, at their expense, remedial classes and register them to sit the relevant examination -WASSCE.

It said the students who successfully went through the examination should be re-admitted to the university college to continue with their study programmes, adding that “this offer should also be valid for a period not exceeding one academic year.

“The Ministry of Education requests the universities/ colleges yet to be visited by the NAB ‘s Audit Team to take pre-emptive measures based on the foregoing directives to ensure sanity in the admission processes of their respective institutions,” it said.

Both the MUCG and the CUC have since put in place measures similar to the ones spelt out by the ministry.

Mr Kwame Dattey, Executive Secretary of the NAB, said the requirements set by the board were not new and that the board had continuously educated the universities on those requirements.

He said it was true that private universities were playing an invaluable role in the educational sector, but insisted that the right thing must be done.

Mr Dattey said the board’s auditing team would continue to inspect tertiary institutions to make sure that they complied with the regulations set out by the NCTE.