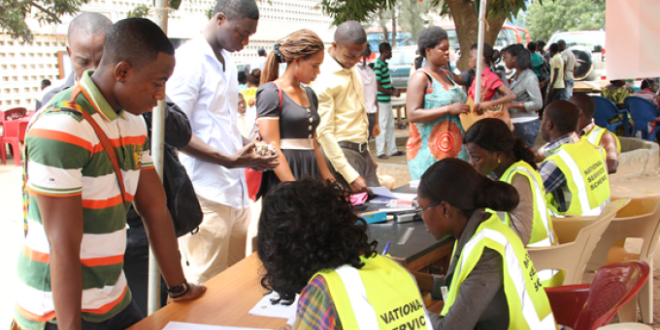 It is difficult to make ends meet on a low salary when the prices of products and services are skyrocketing.

The situation gets worse when payment of allowance delays.

Unfortunately, this is the reality for some National Service Personnel (NSP), whose salaries are in 3 months’ arrears. The personnel say the delay is affecting their living standards as they struggle to survive.

Evans is an NSS person living on a monthly allowance of GH₵559. He revealed that he has not been paid for 3 months. According to him, the situation is worrying as he is unable to meet all his needs.

“We have to pay water and light bills. Plus what I will eat, at the same time looking at the increase of transportation. Moving from my residence to where I work, a day I spend close to 60 cedis. We are not paid on time. At the end of the day, they are not increasing the money. Looking at the current economic crisis we are in, we suffer a lot. They are owing us 3 months arrears, they just paid only one month,” he told JoyNews.

The situation is overbearing such that, he has to take a side job.

“I decided to do a part-time job since the money that we receive is like hand-to-mouth. I decided to venture into teaching so I can get extra money to add to the 559,” he narrated.

Another NSS person, Priscilla, is facing a similar challenge. Priscilla amidst the delayed payment of her allowance has joined a WhatsApp NSS platform to embark on a strike until their arrears are paid. Unlike Evans, she depends on her family for support.

“I’m on strike. We planned it as a group. I’m home watching TV and waiting for the government to pay us then we see what happens. When I call my mother, she would say I’m lying and that I’ve been paid. I tell her I’ve not been paid but she doesn’t believe me. But sometimes she does help.”

Pricilla wants her salary paid on time although she said it is not enough to cater for her expenses.

“At least if they were to pay on time, it would help in one way or the other. But they would wait. I’ve not received my salary in 4 months now which is affecting me. It’s not that much but it would still help.”

When she will return to work is unknown. However, Evans and Pricilla, share a common demand; they want their salaries paid on time and increased to keep up with the escalating living costs. Also, some National Service personnel are expected to demonstrate in the upcoming weeks over their delayed payment of the allowance.

The North Tongu Member of Parliament, Samuel Okudzeto Ablakwa on May 16, asked the government to release funds for the payment of National Service allowance arrears for the months of March and April.

He said the delay in the payment of the allowance “is most unfair and insensitive,” given the current harsh economic conditions.

Mr. Ablakwa argued that although the GH¢559 allowance is inadequate, an early disbursement would go a long way to mitigate the economic challenges and the skyrocketing prices of goods and services.

“I would have thought government would, in the face of prevailing harsh economic circumstances, be increasing the current measly allowances and not delaying payment once again.

“How does the government expect these vulnerable personnel, most of whom have been posted far away from home, to survive under the current cost of living crisis?” he queried.