Video: Commenting about McBrown’s husband is not disrespect – Mzbel 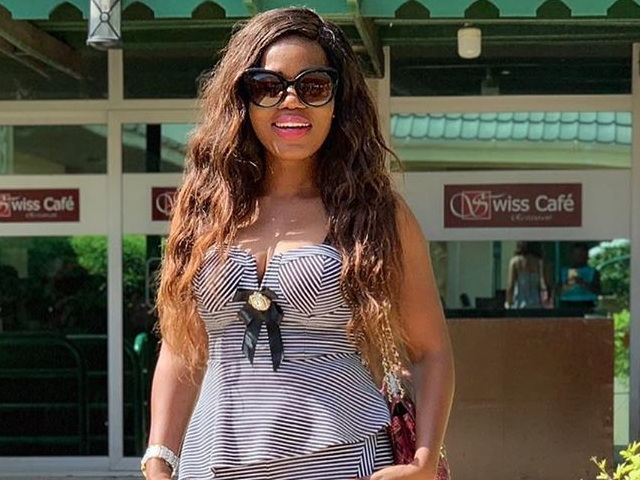 Songstress Mzbel says her comments about her ex-boyfriend, Maxwell Mensah, who is now husband of actress Nana Ama McBrown, cannot be termed as disrespectful.

Mzbel in justifying her numerous commentaries on Maxwell Mensah, which many have termed as unfriendly, claimed she can’t keep mute when questions about her relationship with him pop up during interviews.

Speaking on ‘The Gist’ with MzGee on the JoyNews TV, the musician, born Belinda Nana Ekua Amoah disclosed, until no question is asked about her ex, Maxwell, she would not decline to comment on their affair.

“If they (interviewers) think that my answers will hurt somebody, they shouldn’t ask me at all. So they were expecting no comments. They should say the ‘No comment’ in their heads and not ask me because if you ask me, I know that you want to know,” she added.

Though Mzbel acknowledged the marriage between her former boyfriend Maxwell Mensah and actress Nana Ama McBrown, she is of the opinion that her talks about her past relationship with the former, should rather strengthen the couple.

“How am I disrespecting someone’s husband when I am minding my business? Suddenly, it is out there that I and this boy used to hangout. I gave honest answers, I did not insult him,” she told MzGee.

The ’16 years’ singer also rubbished suggestions she was bitter that the couple were happily married, adding that the presenter who asked her the question about her ex, should be faulted for disrespecting the couple.

“The people asking me the question if they respect them they won’t ask me. The people will get any answers they want to hear. I don’t provide harmful answers.”

The Gist with MzGee shows on the JoyNews channel on MultiTV on Saturdays and Sundays at 8.30pm.

DISCLAIMER: The Views, Comments, Opinions, Contributions and Statements made by Readers and Contributors on this platform do not necessarily represent the views or policy of Multimedia Group Limited.
Tags:
Mzbel