Violent clashes after hundreds show up for China bank protest 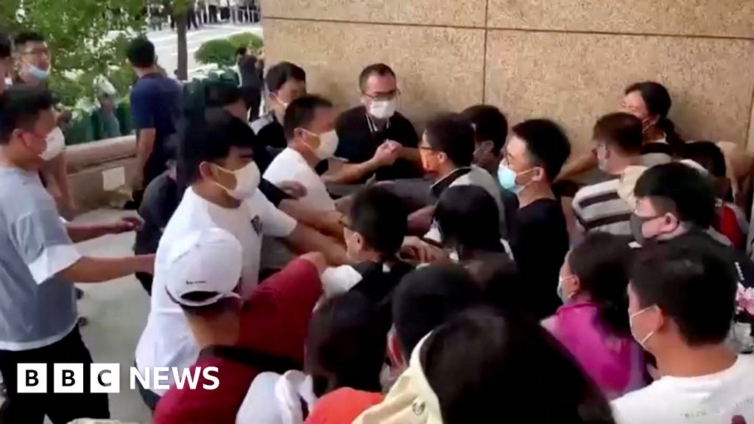 Hundreds of people in China’s Henan province attended a banking protest on Sunday which turned violent after a clash with a group of unidentified men.

Protesters said the banks had frozen their deposits because of supposed upgrades to their internal systems but had not been in communication since.

Some 39bn yuan ($5.8bn; £4.9bn) is believed to have been frozen, leaving hundreds of thousands affected.

Authorities later said they would announce a plan to address the issue.

The incident involving the four banks had been in the spotlight earlier last month as some bank customers had earlier claimed authorities had restricted their movements in a bid to stop them from protesting.

On Sunday, protesters held banners and chanted while sitting on the steps to the Chinese central bank in Zhengzhou, the capital of Henan.

Local media reports say police were present at the scene and had told protesters to leave.

Shortly afterward, protesters were then approached by a group of unidentified men – believed to be security personnel but dressed in plainclothes.

One protester, who had travelled specially to Henan for the demonstration, told BBC Chinese that she had saved more than 100,000 yuan in one of the banks affected and that some protesters had been badly hit.

“A group of people without police uniforms [on] rushed towards us. They hit us hard, especially [the] men,” said the protester, who wanted to be identified only as Ms Wang.

“I saw a man wearing glasses next to me with blood all over his face, from his head to his nose was bleeding, and I was especially scared at that moment.”

Later in the day, local police said they were making progress on investigations into the banks, without mentioning the protests.

However, it later appeared to be censored, and was replaced by the message: “According to relevant regulations and laws the topic [will] not be shown.”

Since then, thousands of customers have been travelling to Zhengzhou to attempt to withdraw their money.

Small protests have erupted, culminating in a large demonstration on 23 May where thousands took to the streets, before police shut it down.

Some bank customers who had visited Zhengzhou later said they had run into issues on their Covid-19 tracing app, which in many Chinese cities is necessary for residents to enter buildings and shops, use public transport or leave the city.

If this status turns red, it indicates the person has tested positive for Covid recently or is suspected to have Covid, and must be quarantined for 14 days.

Some customers of the four banks said their status had turned red, despite their not having been in contact with any Covid cases.

One bank customer told BBC Chinese that her father, who could not get his money out, had recently gone to Zhengzhou to “understand the situation” there.

“Once he came back, his health status turned red. My whole family is now in quarantine after our statuses turned red.”

The China Banking and Insurance Regulatory Commission said last month that the major shareholder of the village banks, a company called Henan New Fortune, used third-party platforms or a money broker to take public funds. The company is suspected of financial crimes and authorities are currently investigating.

On Sunday, police in Henan said in a statement that the “investigation of the case is being carried out in an orderly manner”.

Chinese state media outlet CCTV cited an official who said the local government was working to verify how much customers had deposited with the banks.

The official added that a plan to resolve the crisis would “be announced in the near future”.