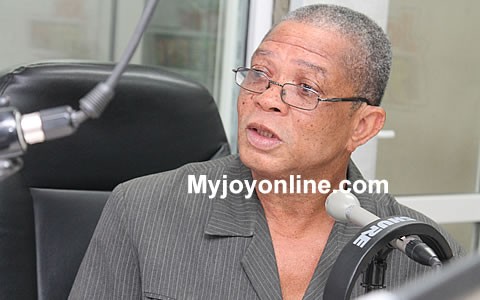 The National Health Insurance Authority has slammed a report by international aid agency OXFAM which criticizes Ghana's health insurance policy as benefiting only the rich.

The OXFAM report published Wednesday says although Ghana’s health insurance scheme has been labeled as a success, millions of Ghanaians do not benefit.

The scheme covers only about 37 per cent of the population and largely excludes the poor and vulnerable in the society, the report concluded.

But officials at the NHIS have rejected the report.

According to him, the NHIS database has 70 per cent subscribers who are catered for free of charge and have no reason not to re-register to be on the scheme.

The subscribers who fall within this category are mostly the aged, pregnant women and children, he pointed out.

Whilst admitting the 37 per cent figure cited in report as beneficiaries of the scheme, Quarmyne explained that figure represents the active members of the scheme.

He noted that the people who are presently not covered by the scheme are those people who have failed to re-register onto the scheme.

He said people must begin to take personal responsibility of themselves and their family by re-registering onto the scheme.

He also charged OXFAM and other interest groups to lead the crusade in raising the consciousness of people and creating the need for people to re-register after expiration of their cards.

But the Country Director for OXFAM, Sebastian Tiah told Joy News people are not re-registering because they do not have the means to do so.

He said even though people recognise the benefit of the scheme they have failed to maximise the benefits because they do not have the means to do so.

Tiah said the scheme officials must be interested in finding out what is preventing people from re-registering onto the scheme even though they are fully aware of the benefit.

IN SICKNESS AND IN WEALTH: WHY INSURANCE SCHEMES ARE BAD FOR POOR NATIONS’ HEALTH

A new report, published today by Oxfam, is warning that health insurance schemes – being promoted by some donor agencies and governments in developing countries – are excluding the poorest and most vulnerable people.

The international agency says that usually only those who are already better-off are able to sign up, leaving the majority of citizens without cover and forcing the poorest  to pay often huge, out of pocket expenses to get health care.

This misguided preoccupation with insurance is also leaving other funding methods largely unexplored. Improving tax collection, for example, could raise up to $269 billion a year*, giving developing countries the potential to double their health budgets. One reason countries are so keen to implement insurance is a false notion that it will generate extra money for health budgets, when in reality it raises very little.

Kevin Roussel, Head of Oxfam’s Essential Services Campaign, said: “Three people every second are forced below the poverty line because of catastrophic health care costs, but this obsession with insurance as the answer is leading poor countries down a blind alley.

“Most insurance schemes are a lose-lose situation. They fail to reach the poorest people and yet collecting insurance premiums costs a huge amount to administer without raising any significant amounts of cash.”

For the African countries that have introduced health insurance, low levels of enrolment are proving to be a major and recurring challenge. Ghana’s National Health Insurance Scheme has been labelled a success but excludes 64 per cent of the population and the vast majority of these are poor people. Ghana‘s NHIS was introduced in 2004, promising to deliver UHC. Yet after ten years of implementation, the NHIS covers just 36 per cent of Ghanaians. The remaining 64 per cent of the population continue to make out-of-pocket payments to access health care.

Although the insurance premiums paid by informal sector workers are subsidized, large numbers of Ghanaians cannot afford the NHIS premiums, which range from $3 to $22 per year. So while every citizen pays for the NHIS through the 2.5 per cent levy on VAT, the majority of families on low incomes are not enrolled in the NHIS and therefore do not benefit.

Ten years after it was introduced in Tanzania, only 17 per cent of the population has health insurance and Kenya’s National Hospital Insurance Fund covers only 18 per cent of Kenyans, despite the fact it was established nearly 50 years ago.

The international agency says developing countries are being derailed from achieving Universal Health Coverage (UHC) – a goal to make sure all citizens get the health services they need without suffering financial hardship – because governments, donors and multilaterals, including the World Bank and the UN’s International Labour Organisation, have historically put too much emphasis on insurance schemes as the solution, even though they have failed to improve access to health care for the poorest.

Oxfam is calling on the World Bank to encourage governments to look for fairer ways to fund UHC, within the framework of President Jim Kim’s new strategy to end extreme poverty and boost shared prosperity.

Kevin Roussel said: “There is a huge danger that Universal Health Coverage becomes all about introducing health insurance schemes and other fairer ways of funding health care are being left by the wayside.

“Universal Health Coverage should mean everyone gets the same financial protection and access to the same high quality health services, regardless of their employment status or ability to pay.”

Oxfam’s report argues that even the poorest countries can increase revenue by improving existing tax collection systems, removing unnecessary tax exemptions and introducing new progressive taxes. Gabon, for example, raised $30 million for health with a tiny levy on the profits of companies that handle remittances and a tax on mobile phone operators.

At the same time, global action to tackle tax dodging by multinational enterprises could save developing countries an estimated $160 billion a year – more than four times the amount spent on health care by all the governments in Sub-Saharan Africa combined.  Kevin Roussel said: “Countries should focus on finding home-grown health financing solutions that are universal and equitable. At the same time donors need to stop pushing unproven insurance schemes which in many cases are actually reinforcing inequality.”