‘Why our online wedding suits us just fine’ 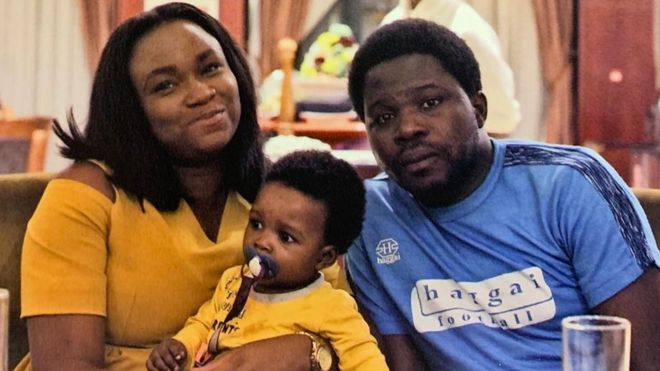 “I want to look back 20 years from now and celebrate… Not because of coronavirus but because I decided to spend the rest of my life with Reme.”

Ayokunle Sulaiman and his fiancée Reme Olotun were counting down to their wedding ceremony at the Sheraton Hotel in Lagos, Nigeria, on 18 April.

But as the pandemic intensified it became obvious that Reme, who lives and works in Canada, would not be able to come back home to Nigeria to marry Ayokunle.

“It was very devastating for me,” she tells the BBC. “I had already bought my dress, my shoes, everything was ready and in place.”

But for his part, the thought of postponing the wedding was not something Ayokunle would entertain. So he thought of a creative way to go ahead.

Finally, the couple decided to have a religious ceremony on 18 April led by a pastor via the video platform Zoom.

“It moved from feeling sad and gloomy to feeling hopeful, positive and upset and optimistic about the situation,” says Reme.

“You seem to have that magic wand to always warm hearts,” she remembers telling her husband that day.

In Nigeria there’s no legal provision for online marriage.

The country’s Marriage Act states that couples have two options – a statutory wedding in a registry office, or a religious ceremony in a licensed place of worship.

But because of ongoing lockdown restrictions on gatherings, legal practitioner Abisola Ogunbadejo says people planning weddings have been asking her about the validity of online ceremonies.

She decided to film a YouTube video providing advice.

Ms Ogunbadejo says that although an online religious ceremony may feel enough for some, it is important to follow up with a legal marriage as soon as possible so that you are covered if issues over assets and custody arise in the future.

For their part, Ayokunle and Reme plan to go ahead with a statutory wedding when Reme can travel to Nigeria, before they both finally move to Canada.

But for the time being the couple feel proud of their decision. And even though they are not married in the eyes of the law, the online ceremony has led them to define their relationship differently.

“I will always celebrate that day as my wedding day,” Ayokunle says. “I think that Reme is my wife and I’ve started calling her my wife so that’s what is important.”

Reme herself says she was initially unsure about the online ceremony, but it was Ayokunle’s imagination and determination that convinced her.

“He was so sweet and so creative, because he tried to make sure that what we had was more like what we would have at our wedding.”

So the couple exchanged vows, listened to a pastor preach about the essentials of marriage, heard tributes from friends, and even had a first dance – albeit remotely.

“You remain as special as the first day we met… My life would be incomplete without you,” Ayokunle told Reme.

Doing it their own way

For many Nigerians weddings are big, lavish occasions and some families spend thousands of dollars on glamorous parties and gifts. But for Reme, having an online wedding was the right fit.

“It is high time we begin to define things for ourselves what we want – people will always have something to say,” she says.

An online wedding meant the couple could ignore societal pressures and focus on what was important.

“It wouldn’t have made any sense to postpone the wedding because of coronavirus,” Akokunle adds.

“It was more than the event – it was about the things both of us wanted to achieve, our life decisions we need to start making as a couple.”

Their new status has brought them closer together and changed how they behave. “After 18 April of course it was mandatory for me to consider Reme in all my decisions,” Ayokunle says.

‘It’s not about the wedding’

They are not the only ones to opt for an online alternative.

Lagos-based Ademola and Yinka Adeleke also had a religious ceremony on 18 April, but only after getting married at a registry office on 12 December 2019.

Ademola says she and Yinka would not have gone ahead with the online ceremony if they weren’t already legally married.

“I think it is as important as being joined together in a church. The pastor can join you, but then you’re not actually married.”

But the newlyweds accept that couples have to assess the situation for themselves given the challenges of living in a pandemic.

“I think the law must begin to think of how to accommodate this current reality.”

“After the wedding, I’ve had so many people reach out to me, saying: ‘You guys have set a pace, you guys have made us begin to think’.

“There are people who have considered the Zoom wedding and have gone ahead with it because they saw our pictures online.”

The couple plan on having a bigger celebration with friends and family after restrictions ease, but Yinka says they feel proud they didn’t feel pressure to follow societal norms or traditions.

“It was not about the whole activity of the wedding. It’s about us and our marriage.”

DISCLAIMER: The Views, Comments, Opinions, Contributions and Statements made by Readers and Contributors on this platform do not necessarily represent the views or policy of Multimedia Group Limited.
Tags:
Ayokunle Sulaiman
Coronavirus in Africa
Nigeria
Online Wedding
Relationships