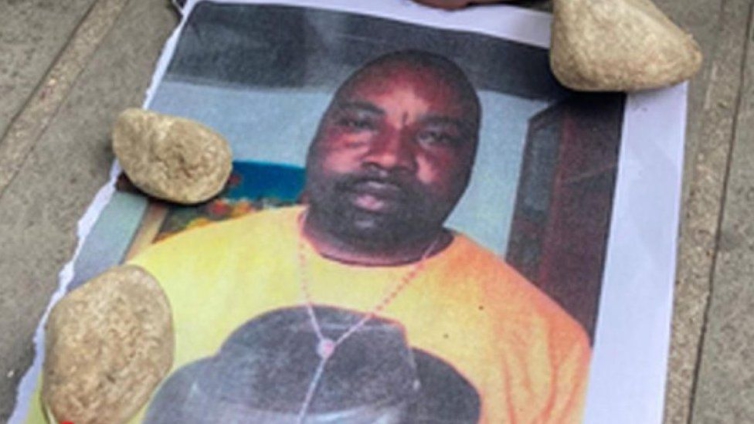 The street trader was not one to go looking for trouble, his wife insisted

The wife of a Nigerian street trader who was killed in Italy has told the BBC she is seeking justice following his “painful death”.

Aliku Ogorchukwu, 39, was reportedly selling handkerchiefs in the seaside town of Civitanova Marche on Friday when he was chased and beaten to death.

A 32-year-old Italian has been arrested on suspicion of murder and robbery.

A video circulating online shows a man on top of Ogorchukwu, punching him with his bare hands.

None of those who witnessed the broad daylight attack appeared to intervene.

“This is a form of wickedness I don’t know,” Ogorchukwu’s wife, Charity Oriachi, told the BBC’s Focus on Africa.

Ms Oriachi said she had received help in coming to terms with her husband’s death but was tired of “talk”. Now, she was only interested in justice, she insisted.

Her family had lived in Italy for a long time, she said, stressing that her husband had never sought any trouble.

The killing has sparked outrage in the local community, including Nigerians, who took to the streets over the weekend and are planning another demonstration soon.

The Nigerian government has asked Italian authorities to quickly “bring the perpetrator of the heinous act” to justice.

The suspect – a white man named as Filippo Claudio Giuseppe Ferlazzo – has been ordered to remain in jail as the investigation continues.

His defence lawyer told the media the suspect had said he was sorry and that there was “no racial element” involved.

A police investigator said Ogorchukwu was attacked after the trader’s “insistent” requests to the suspect and his partner for spare change.

The partner, identified as Elena D, told Italian newspaper Corriere della Sera that Ogorchukwu had touched her arm, but that did not bother her.

Ms Oriachi now wants to see the suspect “face to face”, to understand why he killed her husband, the family’s lawyer told the Associated Press.

DISCLAIMER: The Views, Comments, Opinions, Contributions and Statements made by Readers and Contributors on this platform do not necessarily represent the views or policy of Multimedia Group Limited.
Tags:
Aliku Ogorchukwu
Charity Oriachi
Italy
Nigerian street trader