Boeing has told airlines it expects to have new software for its 737 Max plane ready by the end of the month.

The plane has been grounded following the Ethiopian Airlines aircraft crash earlier this month.

Documents seen by the BBC confirm that the software update will limit the operation of the controversial MCAS system.

That was the same system used by a Lion Air 737 Max which crashed off the coast of Indonesia last year.

Investigators say there are "clear similarities" between the two.

Boeing's Dennis Muilenburg, who is the chairman, president and chief executive of the company, said in an open letter: "Soon we'll release a software update and related pilot training for the 737 Max that will address concerns discovered in the aftermath of the Lion Air Flight 610 accident."

He said the company had been working in "full co-operation" with the relevant authorities and regulators.

There will also be changes to the cockpit warning systems, the flight crew operating manual will be updated and there will be computer-based training for pilots.

It is not clear how long the 737 Max will remain grounded. 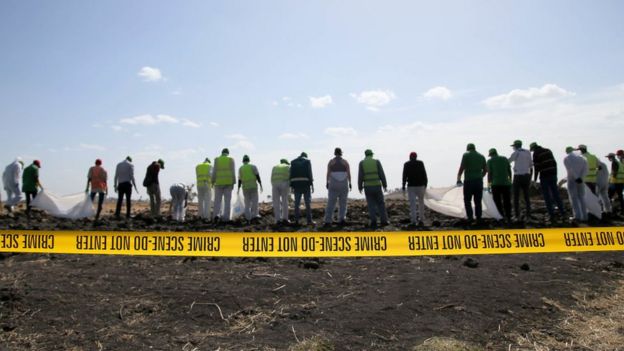 Investigators looking into the Ethiopian Airlines received data from the aircraft's flight recorders, downloaded by experts in France, earlier this week. They intend to to issue a preliminary report by mid-April.

On Tuesday, investigators examining black box recordings from the flight said they had found "clear similarities" with the previous crash.

The French BEA accident authority did not detail the similarities, but media reports suggested they found similar flight angles before the crashes.

It comes amid continuing questions over 737 Max's design and vetting to fly.

Both the Ethiopian Airlines flight eight days ago and the Lion Air aircraft in October crashed within minutes of take-off.

In the case of the Lion Air flight, pilots had difficulties with a new system on the Boeing 737 Max which is designed to keep the plane from stalling.

It prevents a jet from pointing upwards at too high an angle, where it could lose its lift. 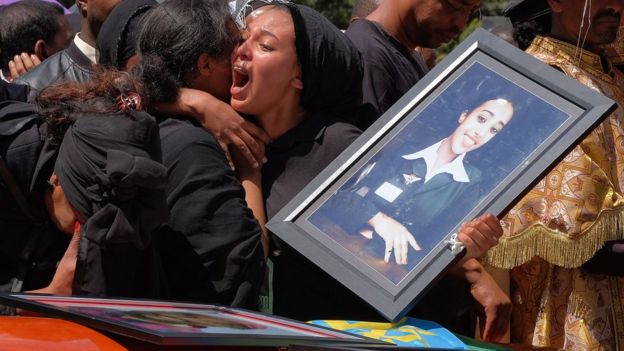 Image caption: A memorial service was held at the weekend for those who perished on Ethiopian Airways flight

But an investigation of the Lion Air flight showed the automatic anti-stalling system repeatedly forced the plane's nose down more than 20 times.

US regulators and safety experts are now asking how thoroughly the FAA and Boeing vetted the anti-stall system and how well pilots around the world were trained for it when their airlines bought new planes.

Over the weekend, a report in the Seattle Times claimed that some analysis before the crash found that the system, called the Maneuvering Characteristics Augmentation System, revealed crucial flaws.

It claims that managers at the FAA instructed its safety engineers to delegate safety assessments to Boeing and to approve the resulting analysis.

The report alleges that the analysis produced by Boeing understated the power of the control system and that it could reset itself every time the pilot responded.

This meant that the system could repeatedly push the nose of the plane down.

Boeing's Mr Muilenburg said the company was in close touch with the authorities: "We've been working in full cooperation with the US Federal Aviation Administration, the Department of Transportation and the National Transportation Safety Board on all issues relating to both the Lion Air and the Ethiopian Airlines accidents since the Lion Air accident occurred in October last year."

Meanwhile, Air Canada has announced that it is updating its schedule until at least 1 July to give its customers "some certainty when booking and travelling".

The airline had been expecting delivery of six new planes in March and April, but has been substituting different aircraft on the 737 Max routes.